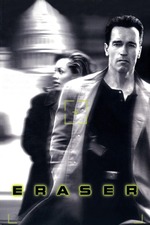 Eraser is a sturdy and compact action film that happened to be the last film of Arnold Schwarzenegger's nearly unstoppable box office reign from the eighties into the nineties before Batman & Robin's catastrophic financial failure. Though it loses some steam towards the end and there's a dull mob subplot that impedes the main proceedings, this is an enjoyably excessive picture that indulges in all of Arnold's strengths as an action star and Vanessa Williams makes for a fetching damsel in distress. It's also features an appealing conspiracy plot involving government corruption and the evil American intelligence agencies where Arnold fights their illegal arms sales of railgun assault rifles to foreign terrorists in order to start armed conflicts in vulnerable countries; which would then escalate into regime change wars as well as generating more profits for the weapons companies that the bad guys have stock in. The railgun assault rifle in particular is pretty cool; equipped with green laser sight, an X-Ray scope, a presumably lithium battery, and a dope light blue tracer round that has a nice fizz to it. The damage it does is pretty incredible, and terrifying. If terrorists, or referred to as 'freedom fighters' in the mainstream media, had access to these futuristic weapons, then countless lives would be lost and the American companies that make them would make billions off of their deaths. I wouldn't be surprised if something like this happens in the near future, only problem is, in real life, there won't be an impossibly invincible Arnold to stop it all.

Also, that action sequence with the plane was fucking crazy awesome. Arnold should've churned out a dozen more action flicks like this one instead crap like Jingle All the Way and End of Days. He really shouldn't have become governor, America needed him as a movie star.