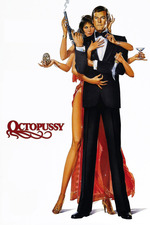 A lot of people hate the Roger Moore movies because they're always over-the-top, ridiculous, and bizarre but I have no problem with any one of those things in a Bond movie. If anything, the Bond franchise is perfectly suitable for these qualities due to the inherent absurdity of the character; who's impossibly invincible, masculine, and unstoppable; mostly due to having the backing of entire nation behind his actions and the infinite financial and popular demand of the franchise's continuation. This one, along with Moonraker, is among the most eccentric and goofy of Bond films and it is often a joyous delight. Though some of the set pieces are uneven and the film feels a bit long, it's one of the better Bond films and has one of the more interesting Bond girls in the titular Octopussy; who is Bond's every match: in intellect, cunning, deviousness, dangerousness, and, I assume, in bed. After all, her name is Octopussy and it's the title of the movie. She has to be, right?