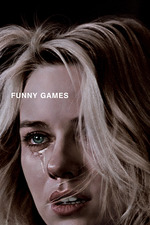 "If you think about it, all of this for a carton of eggs."

I have an undying love for this film and honestly, the more I think about it, this might actually be my favorite horror film of all time. I consider it a horror film at least. It's just so well crafted, so well acted, and the subtext throughout all of this is fucking marvelous. (I like the 1997 version as well, both just with different contexts. 97 version really attacked class directly and it's interesting knowing that Hanake wanted to make this film in America initially. 07 version has all of that plus a veiled attack against the torture porn genre of horror films at the time which is always neat)

I could write a ten page paper on this film, but I won't. The structure and dialogue of this film is so precise, nothing is wasted, and every tiny detail has a purpose. And I've mentioned this before but THE CONTEXT ugh it's just so... I just love it. I love it to bits.