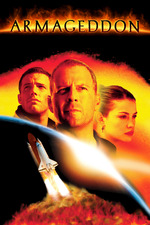 started out watching the movie sans-commentary but it was really boring so we switched to watching it with commentary.

solid commentary! ben affleck steals the show, as is well-known at this point. he makes fun of the movie a lot but still has some interesting stuff to say about what it's like to act in a blockbuster like this.

bay seems like a real tool as you'd expect (way more so than on the rock commentary, but maybe that's partly cause of the difference in the two films' critical receptions), but still also pretty informative about the whole process.