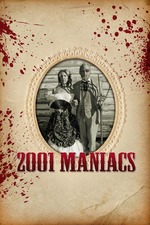 The problem with this film is mostly it trying to straddle both illustrating the Confederate white supremacist cannibals as the bad guys, but also making them both a) the source of humor and b) weirdly giving them a reason that is sympathetic by indicating they were ""innocent"" Confederate people. On top of that, it would be one thing if they were only killing the initial three white college boys who are misogynist assholes, but then they add in a polyamorous trio and two PoC which then leads to homophobic, racist kills that are attempted to be played as a joke, but are in fact just homophobic and racist. I know I'm expecting too much of a Roth produced film, but if I had to watch this for Englund, I at least get to complain about it.