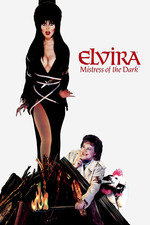 Elvira, Mistress of the Dark

I'm so ashamed and embarrassed to admit that I didn't know this film existed, and thought Elvira's Haunted Hills, which I own, was the only Elvira film. I only discovered this wasn't true when I watched In Search Of Darkness, and of course wanted to rectify that error by watching it. I'm so glad I did! I highly enjoyed it, and not just because my gay little ass was sweating at her final number.

I deeply appreciate the fact that, while Elivra dresses in a way that flaunts her body and she's constantly making innuendo-laden remarks, this is never an open invitation to any man to come after her without her consent. Every single time there's unwanted advances, she takes them out without question, because she never asked! Meanwhile, her love interest is a big, shy, sweet himbo who never ever puts her on the spot. In fact, she's the one actively going after him.

It was also a really cute dynamic that was cultivated between her and the town's teens, aside from the bit about the boys being peeping toms and taking pictures of her without permission obviously. It was just cute that beyond their crushes on her, they did seem to just genuinely really like and appreciate her in general, and that the girls were in on it too. And most definitely having their gay awakenings tbh.

In the end, the point of the film is all about embracing and celebrating one's otherness, and while it's imperfect, it's got a lot of good stuff going for it.