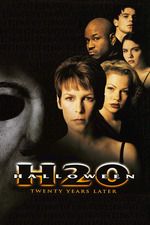 While this has some of the trappings of what we see later in the most recent Halloween film i.e. Laurie and how she struggles with her past trauma, the semi-remake achieves the concept much better. Part of that may be due to the fact I feel like nothing much happened in this i.e. killing and all until the last like... half hour? And if much of that was dedicated to Laurie and her struggles maybe that'd be one thing, but somehow that didn't feel like the case. It was just missing something.

The most recent film had a richness to Laurie and her strained yet unbreakable ties to her family that this just didn't capture.

My favorite thing was LL Cool J being a guard/romance writer who is constantly reading his work to his wife for advice. And hey, he lived at least.

How bonkers fucking strong is Laurie too, to lop off his head in one swing my god