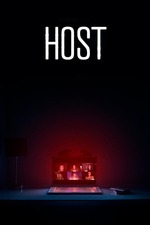 The whole cast and crew of this truly deserve so much kudos for making this work SO well with all the limitations it surely had to deal with. There was never a moment where I felt like it was lacking because of said limitations that were undoubtedly there, instead they made the utmost use of what they had to create something genuinely creepy and unnerving.

A lot of that is in thanks to the actresses, which I love that the film is namely all women. They all feel real, in cozy comfy clothes, one even has her T-zone caked up with something for her pores in the beginning. They all sell the hell out of this, and in a way that feels grounded.

I really loved the use of technology to create creepiness, from Caroline's background almost acting as her own ghost haunting the screen long after she's gone, to the eerie face filter indicating that some invisible presence is in the room. As much as there are moments that make you jump, there's enough subtle creepiness like the one drop of blood on Radina's lens that allows it to find an even ground.

As much as it may be a horror film of the times, I think the impressive work done DURING these times is substantial enough to make it stick. I highly enjoyed it, and any found footage film that's all using screens that makes it work is always a cool thing to see.

Dawn of the Deaf

Night of the Creeps