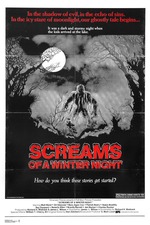 Screams of a Winter Night

As many have noted, this is only a horror anthology in the loosest of terms. The wrap-around story is really the focus most of the time, with little runtime given to the stories being told. The people in the wrap-around are themselves in the stories they're telling which is sort of neat, but unfortunately it all gets buried in the fact that none of them are likable/interesting, and the stories themselves aren't really anything special. I think watching this in better quality might have helped a little, but it wouldn't have changed the fact that one of the stories makes out a rape victim who killed her attacker to be the villain who lost her mind~~ and went on to kill others which is,,,, yikes.

Down a Dark Hall

Phantom of the Paradise