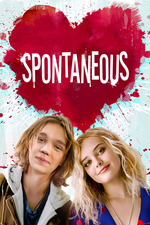 This film blended several different genres all into one film seamlessly, making something completely unique. The chemistry between Dylan and Mara feels so genuine and sweet, and really grounds the film along with a dedication to making all the kids in it feel very much like real kids dealing with tragedy that they can't fathom. I feel like it may have accidentally hit something resonant with what it must be like to be a teen right now dealing with a pandemic amid the usual woes of that age, I can't even imagine.

Two things I really appreciated was how there wasn't really any antagonism among the kids, no jocks vs nerds, nothing like that. They all really just kind of stuck together because of this shared trauma, and it was refreshing not to have those stereotypes, as well as quite a number of clear indications of queer kids that never felt trite. I love you goth bi girl, big same.

I also really appreciated that on the whole, Mara's friendship with Tess held just as much value to her as her relationship with Dylan. It gets a bit muddled towards the end, and it can't be separated from the Black Best Friend trope, but at least it generally felt very genuine and important.

The gravitas that was given to what could have easily been an instead comical take on people bursting like blood balloons was really well done, especially when by the end we sort of knew these kids that were suddenly just gone in an instant. It was heartbreaking, especially seeing how it was ravaging the mental state of these poor kids, their families, and then the fact that people in town were either afraid or even actively blaming the kids for it, it all just made it resonate really well.