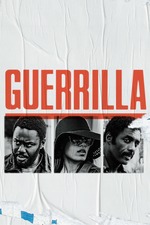 this is not a series meant to be “about” or representative of the UK Black Power Movement. Rather, its about the petty grievances, political infighting, culture wars, and celebrity that come with an era where everyone is a self-styled revolutionary (sound familiar?) — told from the POV of a ragtag, fledging group that spend just as much time arguing over who deserves credit for their manifestos as taking action against oppression.

Ridley has this  knack of creating antagonist Whites who are forever desperate & destined to leech off women of color (Rory Kinnear (👌🏽) as Pence feels like a descendant of Epps, given an Afrikaaner ancestry and a badge — 130 years later) — Freida Pinto is 💯 and GREAT. Things are often told inelegantly and in messy ways here and its a slow burn....it takes a few episodes for the real scope of the storytelling to peel away and find these characters as insecure about their identities and history...but so rewarding, and so much more than what it was mis-marketed to be.