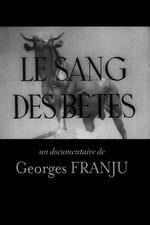 Blood of the Beasts

Blood of the Beasts is a haunting and ultra-realist take on the slaughterhouse and it's relationship to the exterior world. Especially the juxtaposition between the mundane every day and the extreme macabre and violence. It also highlights how much the latter is ingrained into the former.

I remember reading somewhere that Lynch regards viewing this film as a formative moment and influence on his own practice - a fact which is plain to see throughout. David Foster Wallace once described Dahmer as almost Lynchian due to the imagery of him storing human body parts in his fridge next to groceries. It's this partnership of two images that we're lead to believe are miles apart, but in many circumstances, are much closer than we imagine. In Blood of the Beasts, the two images are the idyllic yet mundane life in the outskirts of Paris, and the nearby confines of a slaughterhouse which violent and macabre practices happen day in and day out.

There's actually some scenes of surrealism during the first quarter that I didn't really care for but after reading this segment off Wikipedia I appreciate them much more - "Walter Benjamin argued that surrealism must "disturb capitalist culture’s mythic assumptions of a rationalized evolving history” which is done by provoking a simultaneous interpretation of the past and the present. This, as Benjamin argues, relies on the recognition of horror within everyday life. Franju does this in many ways throughout Le Sang des bêtes. "* The clinical narration of the instruments is a harsh clash against our senses when we simultaneously see them used viscerally to decapitate animals - this highlights the ignorance of modern society. This is the horror within everyday life that Benjamin is referring to, the horror we must face in order to derail our capitalist assumptions.

I think it'd be fascinating to see a contemporary version of this. Especially as slaughterhouses are now even more secretive and avoidant due to self-awareness.

Even in black and white we still feel the deep crimson red that covers the slaughterhouse floors as if it had just rained blood from the ceilings.

Woman in the Dunes