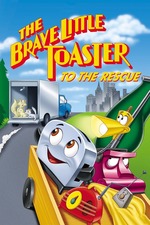 The internet is a series of tubes.

That’s basically the crux (and a line of dialogue delivered in earnest) of this I-never-knew-it-existed sequel to one of my most beloved childhood films.

This time, the gang of increasingly-random-ass-home appliances have followed their master to graduate school where he’s studying to become a vet. A mysterious computer virus erases his thesis and Toaster & Co. have to figure out how to retrieve it while also teaching us what a computer does. There’s also a group of lab animals and, come to think of it, the Toaster really barely does anything in this movie which I found really odd and disconcerting and I shouldn’t put anywhere near this much thought into this cartoon because it’s a f’n toaster and I’m 27-years-old.

Long story short, I like the first movie better. It’s Toy Story with the most boring toys a poor kid can play with but it’s endearing all the same. This sequel, not so much.

And despite what the poster says, this is definitely not the final chapter. There’s apparently another sequel where Ol’ Toaster GOES TO MARS and I (I mean my kid) cannot wait to see it.