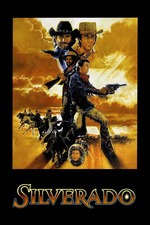 Extremely fast paced. It seemed a bit directionless at times, but the fun factor of it being a western is there. Danny Glover steals every scene he’s in. I think this is the only other western, besides django unchained, that references the treatment of black people in that time period. Not even the outlaw Josey wales could get that right, and the man was a confederate soldier. The movie walks on a constant line between being boring and devoid of meaning, and fun and character driven. I’d say overall though, it comes out on the other side as a very enjoyable western with a fun cast of misfit characters, albeit with fairly low stakes. I think it sets the tone for itself in the beginning, though, when Paden somehow avoids taking any bullets and is shot through the crotch of his long johns. It may not rival the greats of Leone, but it’s one of the closest I’ve ever seen to that style.

Edit: Charlotte and Maggie, your dad makes the best chili I’ve ever had. I love my mother, but she was outdone today.