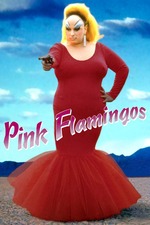 It's probably fair to say that no one else has made a movie quite like Pink Flamingoes. Written, produced, directed and edited by John Waters, it features singer and drag queen Divine playing Babs Johnson. An outrageous avant-garde infamous media personality and a fugitive criminal who is inhabiting a trailer with her oddball family on the outskirts of Phoenix.

She comes to conflict with Raymond and Connie Marble, an incredibly seedy married couple from Baltimore who she feels is attempting to humiliate her by taking away her tabloid-given title of "The Filthiest Person Alive". It's an outrageously immoral black comedy styled as being an unrestrained exercise in shenanigans and crude characterisation; exhibiting a comprehensive and shameless readiness to plummet the depths of bad taste with its notorious fooling around.

It established itself as a breakthrough film for Baltimore-based independent filmmaker John Waters and almost immediately gained a cult following. No doubt helped by being initially banned in several countries around the world due to its perverse acts, all conducted in explicit detail, which induced discussion and controversy in equal measure. It made an underground star of the notably colourful and audacious three hundred pounds cross-dressing Divine, and she demonstrates a considerable eagerness and enthusiasm to do virtually anything for the camera. It's undoubtedly all about the shock value. Still, immaterial to the outrageous behaviours on the screen, the film has got a great soundtrack featuring some tremendous eclectic hits of the nineteen fifties and sixties.