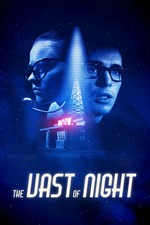 The Vast of Night is a mesmerising invasion film swarmingly elucidated in genuine time. Written by James Montague and Craig W. Sanger, the film is erupting with suggestions and components which establishes uncertainty. Meanwhile, director Andrew Patterson colours the film with contorted visuals while arranging an all-around realistic manner and posture. It's both enchanting and delightful, and while it often feels like a feature-length episode of The Outer Limits, it's Patterson’s filmmaking effectiveness that remains the films primary enchantment.

It's a remarkable debut for Patterson, and his camerawork elevates the tension and mystery of the overall narrative rather superbly. At the same time, it continually reverts to a framing device of a vintage television set and a science fiction show of its era. There's a more extensive spectrum of ideas than what could commonly be anticipated from a low budget science fiction debut, and the final act warrants the anticipation which the film has constructed by managing to arrive at a principally satisfying resolution.