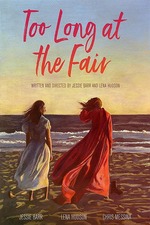 Too Long at the Fair

Too Long at the Fair, which recently premiered on Short of the Week, sees two friends in a rut after showing up late for a children’s birthday party gig. Jessie Barr and Lena Hudson write, star in, and direct the short inspired by their real-life friendship — resulting in a satisfying uniformity from script to execution.

Charlie and Val, turned away from a job they were depending on for cash, are now struggling to pay their rent. As they wallow on the street in their princess costumes having a smoke break, they meet a handsome divorcee named Lee (Chris Messina). After a chat, they end up at his large house for an impromptu three-person party.

Too Long at the Fair, although fun, tackles the fantasy and eventual disillusionment of the L.A dream factory. As the duo sits in Lee’s fancy home, still wearing their frilly candy-colored gowns, they knock back a few drinks while discussing romance, sex, and wish-fulfillment with their new acquaintance. Lee reveals a sexual fantasy of his after being prompted and speaks of the money he would pay to make it happen — introducing the moral dilemma of what we might be willing to do for desperately needed money.
Full review on Filmera