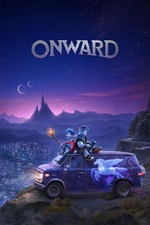 In a time where things seem bleak, Onward provides a much needed dose of humor, love, and magic!

Onward follows two loveable bros on a magical quest to earn the most magical gift of all, time with their late father. The hole his absence has left in their lives is palpable from the start, making the way it's eventually filled all the more sweet.

The relationship between the brothers is endearing and complicated enough to explore some deep themes about differences between family members. The film is cast well, with each of the talented performers bringing infectious energy and sincerity to their characters.

There are some seriously exciting scenes and several laugh out loud moments which will entertain kids and adults alike. The story is paced perfectly, leaving no room for boredom. The bottom half of Dad alone is enough to make every scene amusing.

What can I say, it's Pixar! The formula works every time and I never grow tired of it. Perhaps this is because of the level of thought and detail put into each Pixar film. Though the basic plotline is always familiar and you know a happy ending is waiting around the corner, the beautiful world-building and dynamic characters always make the ride a fun one.

I'd also like to applaud the first openly gay character in a Pixar film. Though she's not a major character, Officer Specter, voiced by the brilliant Lena Waithe, is a step in the right direction for Pixar. During her scene, Officer Specter mentions her girlfriend casually while discussing the difficulties of being a step parent. Hopefully this will be a lesson to young viewers that all parents experience similar things and that a woman's sexual orientation is something she can be proud of and comfortable discussing.

Another awesome addition to the Pixar collection!