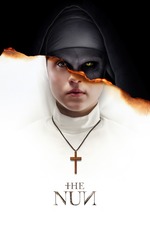 You’d think by now I would stop getting my hopes up about all these horror spin offs, remakes and sequels. Yet once again I did exactly that, and once again was thoroughly disappointed.

Set within the Conjuring franchise The Nun follows a young (not scary) nun and a priest as they investigate an apparent suicide of another nun at a monastery in Romania. As soon as the pair arrive at the monastery it is clear that something weird is going on. This is the point at which I would leave, but obviously they don’t bad spooky happenings unfold from there.

If you like regular, cheap jump scares and are happy with a horror film relying on them alone then you might not have a problem with this movie. Personally I don’t mind a jump scare or two, but this movie goes heavy on them and most often they don’t feel earned. And unfortunately nothing else scary happens in between them. It’s actually a pretty dull film.

The writing is kind of lazy, and there are times when I had to wonder what the (scary) Nun is actually hoping to achieve with her (its?) actions. At one point she buries the priest alive in a grave complete with a gravestone that nobody but the audience is witness to - did the Nun do this for our benefit? Maybe she just has a flare for the dramatic, who knows.

Despite my dislike for the way the movie was written, I spent most of its runtime feeling pretty sure that there was going to be a cool twist to connect this film to the wider Conjuring universe. It was clear as day to me that the young nun looked just like Lorraine from the Conjuring movies so I was confident that she would turn out to be a young Lorraine, or her relative or something. Turns out I was wrong, they just cast the sister of Vera Farmiga in the role. There was a kind of “twist” at the end that did tie the movies together, but it was nowhere near the sort of thing I had been anticipating.

Overall, The Nun is yet another reminder of just how bad mainstream horror movies are getting these days. It’s a poorly written, boring, and overly predictable movie that relies far too heavily on jump scares. Yet it still made a bunch of money and will likely get a sequel, so what do I know?