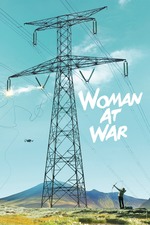 Halldóra Geirharðsdóttir plays Halla, the titular eco-warrior - and her hippy identical twin sister, Ása - in Benedikt Erlingsson’s quirkily satirical drama. When we first meet her, she is using a bow and arrow to fire a cable across the wires between two electricity pylons, then makes her escape across the unforgiving yet spectacular Icelandic landscape pursued by a police helicopter, having disabled the power supply to an aluminium smelting plant. Before long we see her colluding with a civil service insider, discussing the next steps in her campaign, but just as we think we know exactly where the story is going it takes on an unexpected additional dimension.

It’s refreshing to see a film where the protagonist is a handsome 49 year-old woman and the story is not about dying of cancer, starting a new life after divorce or caring for elderly relatives, but about securing a future for the human race. Dressed in a thick woolly jumper, Halla is reminiscent of Sarah Lund in The Killing and it’s no bad thing to be compared to a character who is smart, independent and interesting. When did you last see a film where a middle-aged woman hunts down and destroys a spy drone with a bow and arrow while wearing a paper Nelson Mandela mask? Never, that’s when.

The title tells us where writer, producer and director Benedikt Erlingsson stands on the subject of climate change, but in his pointed satire we see the mysterious Mountain Woman’s message of climate activism being distorted by politicians, the media and an unsympathetic public, twisting the facts to make burgeoning industrialisation appear to be good for the country instead of poisoning the atmosphere. And there is a familiar dig at institutionalised racism as we see the same poor immigrant being wrongly arrested time and time again because of his appearance.

I was put in mind of the Coen Brothers’ O Brother, Where Art Thou? because it’s hard to think of Woman at War without thinking about its music. Arguably the most memorable thing about the film isn’t the satirical story or the Icelandic scenery but the presence of pianist Davíð Þór Jónsson, sousaphone player Omar Gudjonsson and drummer Magnús Trygvason Eliassen along with a trio of Ukrainian folk singers, Iryna Danyleiko, Galyna Goncharenko and Susanna Karpenko. From the very beginning of the story, not only do we hear the musical soundtrack, we watch it being performed by the musicians. Whether it’s out on the moors or in Halla’s home, these musicians are discreetly shadowing her every move, scoring her journey through the film with an accompaniment that, like any other film music, is by turns tense, celebratory and sad. As the film goes on, they almost become characters in the story - at one point we see them on a break, smoking and checking their phones; and on occasion, Halla will silently nod to prompt them into action. I think I even detected an eye-roll at one point, as if she has grown just a bit exasperated by being constantly followed by a narrative metaphor made flesh. It’s not the most subtle of cinematic concepts, but it’s charming and unusual and helps to lighten what could otherwise have been a darker tale.

Woman at War wouldn’t be half as good a film if it didn’t have this lightness of touch and a story with so much heart. More than just a satire, it’s a very human story about love and sacrifice and finding meaning in life through relationships with people and nature. And, perhaps most of all, music.