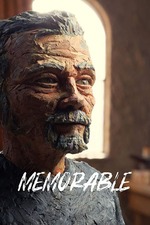 After watching all of the animated short films nominated by The Academy, Memorable was the only one that struck me as review-material. I'm struggling with properly reviewing short films, particularly those less than 20 minutes long, but this is the exception. Not only is it my favorite out of the five, but it's the one that strikes me as an example of what the medium animation can do for storytelling. The uncomfortable reality of dementia continues to be a theme in cinema, even in terms of animated shorts. However, I haven't seen the concept explored in the abstract yet resonating way Memorable presents it.

Stop-motion continues to be my favorite form of animation, and the animators of this short bring justice to this variation of the medium. Not only is the animation breathtaking, but it's unique and surreal in its presentation. Rather than build up the struggles of dementia, Memorable uses its animation to shove its audience right into the subjective lens of it. I can't guarantee if it's an accurate portrayal, but seeing this through the eyes of a painter helps justify the dreamlike imagery. Much like a dream, it's fantastical yet disorienting, with reality collapsing in on itself to make way for its logic, or more accurately the lack of it. Not only does it propel the narrative, but there were plenty of moments that left me in awe. If there are any behind-the-scenes videos, I'd love to see them.

Ultimately, it's the animation that gives Memorable its complexity. Without the visuals accompanying the story, it wouldn't be anything special. However, the visual medium works wonders with this simple yet emotional story, and it doesn't lose anything from being less than 20 minutes long. While I'm not sure how much it'll hold up on rewatch, on first viewing, this is one of the best examples of short animation I've seen in a long time. It'll be a matter of time to see if this wins, but it doesn't matter either way. It's my favorite of the lot, and an awards show isn't going to change that; regardless, I'm thankful for The Academy giving this one recognition. I wouldn't know its existence without them. They make terrible decisions, but I do have to give them credit for putting things like this into the limelight.