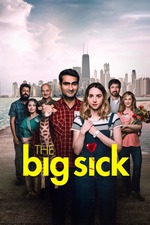 Apologies for the inactivity as of late, work and health complications are not the best mix. To keep things simple for now, the best review to curb my unexpected hiatus would be Kumail's The Big Sick, the textbook definition of a film trapped in an "I'll get to it eventually" purgatory. Much of that comes from my immense distaste for romantic comedies, especially the overly sappy nonsense studios shove out every year. However, while this isn't a standout exception to the rule, this film manages to break away from many annoying tropes that litter this type of comedy film and manages to throw in decent humor.

I haven't seen any of Kumail's standup, nor am I familiar with his brand of humor in general, but there were plenty of solid chuckles throughout the running time that kept me engaged. It helps that the script bases itself on Kumail's personal life, which becomes much more engaging to watch by the second act than the usual romantic comedy. While it does devolve into the typical tropes by the last third and the script drags at a few points, The Big Sick has enough merit behind the script-writing that puts it a step above the average romantic comedy.

Even so, this film falls under the same trap as many other comedies; there's nothing to appreciate cinematically. It's the same monotonous style any comedic television show employs in a cinematic format, and it alienates anyone that doesn't find the film hilarious at every turn. While The Big Sick isn't incompetent in any technical areas, it doesn't engage the audience in any unique way. Not every film needs cinematography akin to an art film, but the presentation doesn't go beyond any sitcom available to watch on cable. Granted, the acting in this film does go beyond that, even if that's not particularly exceptional either.

As a whole, The Big Sick is a film that's a phenomenal one to watch on an airplane or any other fashion that doesn't require full attention at all times. It's above the bar and can appeal to most audiences, but doesn't demand anything from its audience; to be fair, considering the state I've been in, it's something I'll happily take even if this won't last in my memory for long. I'm thankful for this film being a decent interlude before I go back to much better reviews than this, and it's a film I can recommend to anyone who can sit through modern studio comedies.