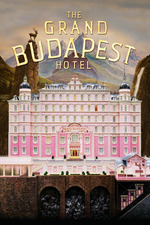 My first rewatch since I saw it in the theater all those years back. It's still great! Anderson's visuals and trademark symmetrical framing is on full blast, so if you're not a fan of that then this isn't the movie for you. I would almost call this a comedy. Fiennes in particular gets the best lines.

It's difficult to pin down a main character. Is it Jude Law's writer, Zero the lobby boy, or Fiennes' Gustav? You can identify with any of them, despite the generational gap and huge expanses in time between their stories. That's another positive, it's exceptional at expressing the different time zones the story is told in.

The cast is also full of noticable cameos, but not to the point of distraction. Even Bill Murray's tiny role is somewhat important in its isolated way, and besides each cameo is welcome and enjoyable as opposed to something that takes the viewer out of the movie. Five stars.