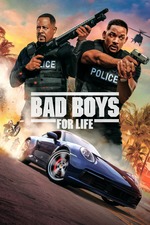 Lee, or El Duderino, if, you're not into the whole brevity thing’s review published on Letterboxd:

"MLK just tapped out, you now have brother  Malcolm. We can handle this by any means necessary."

This is my second viewing, and I still cried and laughed throughout. I wasn't as shocked though, mainly because I obviously knew where the plot was headed. But my parents sure didn't, and they had a blast. For the most part, these two best friends are the same. Still, like with any reasonable continuation of a series, they feel more lived-in, consul one another, and take what they've been through to evolve and develop their relationship. These are two guys who live by the creed we all know to well, they're "Bad Boys for life! Ride or Dies!", who go hand in hand with The Fast and the Furious' matching bromance, Dom & Brian. The chemistry is everything for both franchises, and I, for one, am an unapologetic fan of both. If not anything else, Bad Boys For Life absolutely nails the brotherly bond that Will Smith and Martin Lawrence originally created back in simpler 1995. That brotherly rivalry and need to always have the last word is still lightning in a bottle, and I'm so glad that rather than try to replace or cover with the likes of The Rock, Kevin Hart, or Ryan Reynolds, Smith & Lawrence both commit to this last ride. While both play what is one of their most iconic roles with just as much panache and gusto as they did 25 years ago, late-game Will Smith continues to impress me. Suffice it to say, these "grandpas" have still got it, and they prove that they have more than enough to warrant, "One last time, but this here is the remix." Rather than to just fabricate an entire film completely pieces together from recycled and regurgitated callbacks and inside jokes, For Life actually brings the duo full circle. Nobody is phoning it in here, and despite being a finale, I'd gladly continue watching M&M for life. Obviously, having an investment or some level of enjoyment from the previous two films will aid greatly in how this one vibes with you. But hear me out, it's extremely rare for the third film in a franchise to bring something new and of note to the table, and even harder for it to actually take risks. Bad Boys For Life does exactly that, and I hold no degree of shame in stating that this film made me cry. I'd have to rewatch the first film, but this third entry might just be their best outing in terms of the narrative.

READ MY FULL REVIEW ON MIDLINE