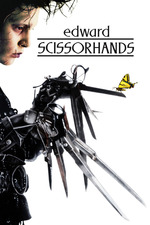 Edward Scissorhands (played by Johnny Depp) is about a man who has scissors for hands. The film begins with a friendly Avon saleswoman Peg Boggs (played by Kathy Baker) who visits this abandoned mansion on the edge of the town and discovers Edward and she takes him home with her. From there on we Edward trying to fit in with the locals and discover the world that has been closed off from him. The film poignantly depicts Edwards early years through flashbacks of his past and how his 'owner' (played by Vincent Price) treated him. Edward becomes popular among the neighbors and are impressed by his adept hedge-trimming and hair-cutting skills. He begins to fall in love with the Boggs' beautiful teenage daughter Kim (played by Winona Ryder), despite her initial fear of him. Edward throughout the film expresses some sad utterances such as "I'm not finished" or "Hold me, I can't". When people don't understand something or somebody their feelings turn to that of fear, hatred and envy and this sadly applied to Edward because he was socially inept and some characters such as Jim, Kims boyfriend, takes advantage of him. Unfortunately as the movie progresses we witness Edwards popularity dissipate and we see this once popular and respected member of the community driven back to where he came from. Kim leaves Edward alone forever more because wants to remember him the way he was in her youth. Edward unable to understand the harshness of people and unable to fit in returns to the one place where he felt wanted and comfortable, on his own. It is ultimately an extremely poignant story about a man's rise and demise and who only ever wanted to fit in. Edward Scissorhands explores themes such as isolation, loneliness and self-discovery. It is not just some whimsical fairy tale, under the surface it is full of metaphors and subtext that represents or portrays society. It is essentially a dark tale about a man who only wanted to fit in. It is just hauntingly poetic.