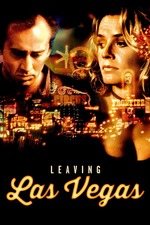 ...A romantic way to go...if there was such a way. But Ben never used to be like that. At the start of this neon soaked masterpiece we see Ben ridding himself of the last remnants of family life and leaving it all behind for the drink. We see a photo of himself, his wife and his son before the drink had a grip on him. You could say that Ben had it all but he was always chasing something more elusive - that his family could not provide him. Things fell down for him like dominoes, his friends, his job, his family...everything......but the drink was always there like a loyal friend. Ben was a man that could not be stopped....he was pushing that self-destruct button hard an that is how it was for Ben.

Sera with an "E". S-E-R-A....on the other hand was a lonely prostitute who you always felt was always striving to feel loved - loved in the context of something more deeper or spiritual and not the kind of superficial 'love' she was getting from her clients, No, she always was seeking to be loved by the men in her life.

On the outset this doesn't seem like you typical romantic flick but there is something oddly romantic about it nonetheless. Especially considering they are both on the fast track to oblivion. They hadn't much but at least they had each other....but not for long - something had to give in this high inflammable relationship. You could see where the relationship was going but that didn't make it any easier.

'Sting' provides us with the Jazzy soundtrack that really gives the film an extra boost and sets up the atmosphere nicely in Sin City. Nicolas Cage in his best performance of his career plays a great drunk and Elisabeth Shue should have won an academy award for her portrayal of a lost soul. 'Leaving Las Vegas' is a deeply sad portrayal of a man who once had it all - he is perceptive of his situation and he knows what he wants and in that same breath it is a romantic way to go.