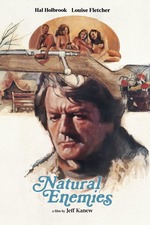 I have had the good fortune to have seen a handful of movies that have really stirred an emotion in me - lingered with me for years. 'Natural Enemies' is no different. As a young single man, this film has such a profound effect on me. Never has such a film effected me since I seen 'The Fire Within (1963)'. Paul (played by Hal Holbrook) and Miriam (played by Louise Fletcher) are in a loveless marriage bereft of any happiness. Miriam suffers from clinical depression and was hospitalized several times. Paul is an intelligent middle-aged man who is a magazine editor who has noticed in the papers, many murder-suicides perpetrated by the father - murdering their entire family and then themselves. He pays five hookers to fulfill a final fantasy before killing himself and his family.

'Natural Enemies' is a deeply affecting tour DE force. It does resemble 'My Dinner with Andre (1981)' in that similar issues and ideas are discussed about society and where it is heading. There are many thought-provoking discussions throughout the film where Paul's friends and acquaintances try to reason with him but his counterarguments are so methodical and well-thought out that they have nothing to add. The first of such meetings is with an astronaut about the possibility of him writing an article. What ensues is an intoxicating contemplative discussion about what it was like up on the moon and how that loneliness up there is like the loneliness that we carry around every day. Paul concludes that no matter what you do in your life you will never have a moment up there like that again and how sad that is. Paul meets his friend who is a Holocaust survivor who is frustrated that so many have forgotten the horrors of Nazi Germany and Paul retorts in a thought-provoking statement: "what were you expecting? Outrage? This in 1978 the youth care only about tennis and discos!"...chilling. He gets a Taxi and yet another profound discussion ensues. The taxi-driver states that life in the city has gone to the dogs. The Taxi-driver went to a doctor complaining with a pain in his stomach and his doctor said that it was because of the times. This shouldn't be. He met his friend again, the Holocaust survivor at a diner where his friend was worried about his intentions to kill his family and himself. The survivor was trying to reason with him - to no avail - he said that he knew all too well what death was but Paul said that "life today is not all that different from the Holocaust." That what was the point in continuing when life was misery and what was the point in having children when they don't talk to you? What was the point in running after women and money? At the end of the conversation his friend thought he was getting somewhere with him only for Paul to state that "what is the point in killing myself? I am dead already." Only for his friend to shake his head in disappointment. He couldn't get through to him.

Even thou their marriage was dead, they still needed each other. They still hung on to each other like when Paul found Miriam hysterical on the floor, shouting.."I WANT TO DIE", Paul comforted her. Miriam was frantically trying to stop Paul from killing himself. They needed each other. The would be lost without each other. They fall into each others unhappiness as into a well. At the bottom is a great sun that warms the earth. They are use to conformity and familiarity and you introduce change to their lives and you have introduced the downward spiral. 'Natural Enemies' haunts me. It is sad that it is so unknown. Under 100 votes - it is fair to say that you won't see a film like it again. I certainly won't.