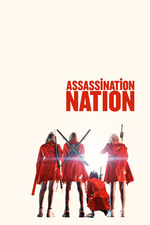 I went into this with kind of low expectations, kind of not knowing what to expect and also mildly assuming I'd be underwhelmed. Just sort of a hunch. And I wasn't really wrong.

There are things to like about this movie; I think it's well shot, with some especially nice camera work (the home invasion scene is very fluid and gorgeously played out). It's stylish and colorful (though an issue with the projector at my theater muted the colors a little bit; not badly enough to merit skipping out on the movie but enough that I had to make note of it). It also tackles some very interesting and topical social and political elements, and brings to the table a variety of characters who are pretty interesting and flawed. But for a film that explicitly claims it isn't hyperbole in the opening monologue, it sure is entirely hyperbolic. Sometimes that works, and sometimes it doesn't. In particular, as the film builds up to a pretty explosive conclusion, it winds up completely flaccid with a jokey ending that not only feels dated, but fails to meaningfully resolve the story of the characters in the film, or expand upon the bigger political agendas that it is clearly reaching for.

I have no doubts that this is going to be popular with a certain subset of viewers; and reasonably it should be. The casting and the subject matter are important. But for little old me, trying to break it down as a movie, it's just a frustration. The pacing is drawn out and tedious with numerous slow motion music video montages that contribute very little, the finale's momentum is brought to a screeching halt by the final scene, and key characters vanish entirely from the resolution. While pieces and segments touch on the profound and poignant, the sum of its ambition is just a bit incoherent.