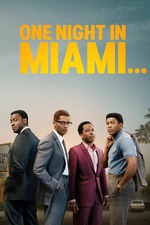 Excellent historical fiction. In the first half I was afraid it would be one of those movies that can't get away from their stage roots, but the structure of the play works so perfectly that I can't see the story being done any other way. The alternating quartet and 2x2 scenes are a formula, but the formula really works.

No outstanding performance just because all four are too good for any one to break away, though I'll say the most unexpectedly delightful moment was when Malcom X tries to reference his gangster past to prove his cred to the younger men, and they pretend to discount it while continuing to respect him immensely. It shows brilliantly how they have a friendship rather than just an alliance.

Also great supporting performances. The most important is probably Lance Reddick as Malcom X's enigmatic guard, but Beau Bridges does a pretty amazing brief turn as the face of an incredibly nuanced and specific kind of racism that stands out in a medium full of more lazy, generic portrayals.