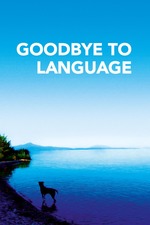 Well hello there, Mr. Jean-Luc Godard. Where've you been the past few decades? I've missed you and your style, old friend. I'm glad you decided to embrace some of modern technology for your latest artistic endeavor. It was quite a ride, short but sweet, as they say.

Indeed, Godard's "Goodbye to Language 3D" is a visual and aural masterpiece that brings him back to his roots. The King of Avant Garde has returned, and with him he has brought a colorful and fiery rage upon the world of cinema.

Godard masterfully uses modern 3D technology to tell his romantic story, and does it in the most unique way I've ever seen. Some of the scenes have parts where one character will move off-camera, but the camera still follows that character while staying focused on another character in another part of the shot. I realized that this was an extremely clever use of the 3D glasses, in that one image is projected in one eye, and a completely different one is projected in the other, giving the viewer a beautiful blended double view of what's happening, rather than going "old school" and making all these scenes split-screen. It really was a clever and gorgeous technique that I particularly appreciated.

Naturally, Godard prefers to use imagery and sounds in his film to tell the story, rather than heavy dialogue that hands the plot to the audience on a silver platter. The plot is rather simplistic, but when Godard executes this story in his own style, it becomes one of the most breathtaking experiences of my life.

The film is extremely short at 69 minutes with credits, but that doesn't mean it's not worth your time in the least. I really couldn't see the story taking much longer to unfold, and the imagery and scenes scattered throughout the film will entrance you to the point where you won't care about the length, you'll just want to experience it all over again. Welcome back, Mr. Godard. I hope you're here to stay- I've missed you for so long.