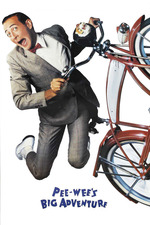 Pee-Wee's Big Adventure is chock full of stupidity, but it's fully aware of it. Instead of trying to nail thoughtful comedy, it revels in its own juvenile atmosphere. One look at this film and you can so clearly see the marks and bearings of one of his films, and he feels like the perfect fit to direct it. His typical dose of insanity is heavily inserted into this film's themes, which makes it all the more better.

Big Adventure has a simple enough story, but is packed with enough bouts of over-the-top stupid humor (mostly thanks to Paul Reubens' hilarious antics) to satisfy the most easily entertained. There are unique characters galore that bear the markings that a traditional road trip adventure film like this should have, and a few moments worthy of being a lasting memory, the most obvious one being the "Tequila" dance segment. Seeing Pee-Wee tap dance in the bar with The Champs' signature hit song in the background brings a smile to my face every time I see it, no matter how many times.

I had never seen anything that had to do with Pee-Wee Herman until a few years ago, so I can't say that Paul Reubens' character had any presence in my life when I was growing up. I've no doubt that I would have adored this character when I was a kid, as he clearly has great appeal to kids. What makes Reubens' character so special, however, is how funny he can be even to adults now. I view it not as a film geared exclusively towards kids (the original TV special that featured Pee-Wee Herman definitely was not), but rather a film that revels in stupidity for everyone to enjoy. It's nothing really personally special or memorable for me, but it's definitely a bit of fun. Sometimes it's fun to just tune out for a little while and enjoy something for what it is. Pee-Wee's Big Adventure offers one of those great opportunities.