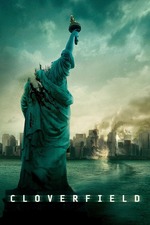 Cloverfield takes the risk of using the found footage technique making realism a high priority on the list of importance. For some reason, it's really easy to stumble when using found footage because of the high expectations audiences have in realism going into the film as well as wanting to see the threatening creature or situation that makes the film what it is and a lot of time found footage films seems to never be able to balance those two priorities in a satisfying way. Well, Cloverfield nails the core aspect of what a found footage film is supposed to be and it takes you on a wild ride but in a very realistic way that keeps you engaged and interested in seeing where this film takes you.

The premise of this film may not be exclusively unique to Cloverfield yet while watching the film I felt like it was unlike any other film I've seen. The incredible realism from how the characters talk and act to the strong tone that stays with you throughout the film Cloverfield really leaves an everlasting impression on you. I thought the pacing was great and the psychological aspect of this was incredible and arguably more impactful then the visual terror displayed on the screen. The film is truly thrilling and uses the found footage aspect of the film making perfectly in a way that truly affected your experience with the film.

The writing in this film is fantastic. The script is structured magnificently and the character dynamics are pulled off in such a fantastic and realistic way that added another layer on top of the already solid realistic foundation of the film. The dialogue is also very fluent and real, this just adds to the many reasons I liked this film. The cast was absolutely fantastic and I was genuinely shocked with how
impressed I was with every performance.

At the end of the day, Cloverfield is an intense, thrilling and realistic experience despite at its core being more fantasy and unrealistic. This film that feels like a film about survival, terror and destruction manages to pull you in emotionally and keep you engaged and invested in this film. The pacing is great and you never feel bored or feel like anything is too realistic. The film is a little foggy with its rules and its explanation around what's happening but you are way more invested in the characters than the monster to even really care so it isn't a huge flaw.

The filmmaking is great, the editing and sound are especially fantastic, this is definitely one of those films that are worth watching just for the technical aspect especially since they managed to nail the found footage style perfectly. This is a great film driven by fantastic writing, story and characters that will leave you wanting more and constantly thinking about it so if you are into films that manage to deliver those high qualities then I'd definitely recommend this movie for you.