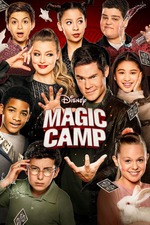 I just recently subscribed to Disney+ since I got two free months due to some partnership they are doing with Fortnite and I really wanted to watch The Mandalorian and the mcu shows that will be coming soon so I decided I may as well get on board early. While browsing through Disney's catalog I was very shocked to come across this film Magic Camp that happens to stars two of my favorite actors in Adam Devine and Gillian Jacob's. I couldn't not watch this film after that so well here we are.

Magic Camp is pretty much exactly what you expect it to be, a fun, childish Disney original film that isn't horrible but isn't good by any mean either. Yet Magic Camp still manages to maximize on it's biggest appeal and that is the duo of Adam and Gillian, both are fantastic in this film and the on screen chemistry between the two is honestly fantastic. When I seen that they were both in this film I knew that it would be a match made in heaven and it really was. Would definitely love to see a film that's more up there ally together in the future because they are truly fantastic.

Magic Camp is a fantastic film for kids, the comedy is random and had me laughing at time to time, the characters are vast and diverse enough that there is someone for any kid watching at home to relate to, the character development was actually pretty great and some of the underlying storylines such as the stuff about grief and finding the thing that makes you happy were great pure little fun things to be engaged with. I liked the craziness of this film especially since it's a film about a Magic Camp and I also thought it did a good job at being solid and coherent when it needed to be. The pacing was great and the tone was fun, the themes covered were as important to people's lives as they were just crazy and fun. I actually enjoyed Magic Camp a lot more than I expected to!