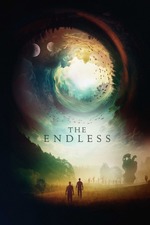 I was really iffy on the premise of this film and even as they added these twists and hints I still couldn't tell if I really liked this film or not. I mean there were definitely things I liked about it and all the performances were strong but the editing and pacing definitely felt off. It wasn't really until the last 40 minutes of this movie that I really felt truly engaged and interested.

I was genuinely creeped out but I was still interested in this very interesting world that was being built. As things started to make more sense at least from a comprehensive standpoint the more I really liked this movie, I thought the build-up was worth it for an intense thrilling atmosphere that really got ramped up in this third act. These interesting characters were just as fascinating as the entire sci-fi aspect of this movie, I mean even the rules set for the film was just intriguing.

This movie gives you enough information to understand what's going on while still giving you the opportunity to figure things out as the film goes on yourself but it doesn't sacrifice the unsettling mysterious feeling the film gives you the deeper you go. I also found the ending to be perfect especially for this film, not only do I always love these kinds of ending that keeps you thinking in overdrive afterwards but it's a beautiful ending that perfectly fits the film.

I do think there's more that could have been done with this movie but it definitely with a lot of interesting and personal ideology that gets you thinking. The movie isn't incredible and the overall premise isn't exactly unique but the film does a fantastic job at tapping into the parts of your head that makes you engaged in everything happening in a movie even after your done watching it. You still think about it and want to talk about it because it's so interesting and gives you this weird feeling throughout the film.

I really did enjoy The Endless and believe it's one of the more fascinating and just unsettling films I've seen in quite some time but I love that I've finally watched a film that I probably won't stop thinking about for a while. The cast was fantastic as expected and I think they truly did a great job at making every decision a character in the film makes sense for the character. This movie definitely has its issues, one thing was that the movie stylistically didn't fit tone or ideas the film was filled with. I found it to look bland and unappealing but not in a way the filmmakers intended to come off as.

There are many shots that if coloured or just shot differently that they could have made a much bigger and more positive impact on the overall film. I also find it hard to really put yourself fully into the first 30+ minutes of the movie because everything feels small and unnecessary. At the end of the day, The Endless is a very interesting film filled with all kinds of strong moments and acting that could be very unique in its feeling and atmosphere despite being less unique in its actual premise. I had a good time watching it and still can't stop thinking about it and if you like films that make you think then I'd recommend this movie to you. Same as for people who like sci-fi type films or films about cults than I think you'd really like this movie.