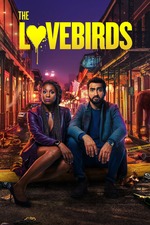 I don't get why The Lovebirds is getting so much hate. I mean I can understand why everyone wasn't pleased with this film but I personally thought it did a lot right and it was able to easily pull me in. A Rom-Com is, in my opinion, one of the hardest sub-genres to do right, especially since there needs to be a strong element of realism to really draw your audience in and it's very easy to make small mistakes that work against the realism of a rom-com but Lovebirds doesn't stumble in that aspect much at all.

Actually, Lovebirds to me portrays one of the most realistic relationships and dynamics between characters in this genre. I loved how the film opens up in what seems like a purely romantic way with a very heartwarming scene then effortlessly transitions to the future where this relationship that was just birthed is know being highly tested through the aggression and frustrations that come with being in a long last relationship. This transaction is flowed perfectly and doesn't rip you out of the film like other films have when having such a huge dynamic change.

I loved the tone of this film like I really enjoyed how personal, goofy and real this film can get. It manages to mesh these uniquely separate tones in a way that was genuine, at times heartbreaking and yet could be tons of fun. This is definitely one of those generic big comedies where a bunch of random things happen that don't make much sense but the comedy and dynamics are so great that everything surprisingly just works for this film. The writing is also pretty great, I mean the dialogue is a huge part of what makes this film so fun to watch and there are lots of great moments, ideas and creativity.

I absolutely loved the premise of this film and I liked how human this film can get. I know this whole human thing seems like a trope with me lately but seriously this film understands how humans react to things and because of this you easily find yourself connected to this film and it can be very realistic. Like when something unreasonable happens the character's reaction is a reflection of the shock and it's pulled off very well and this goes for every reaction or emotion they all fit the moment on screen. I also loved the cast, with two absolutely phenomenal starring roles it shouldn't come as a shock that acting was the best part of the film. Issa Rae is an already proven actress that is incredible and very funny and Kumail Nanjiani is quickly building a strong reputation of being one of the funniest and best actors in the business right now. The rest of the cast is fantastic but doesn't have much importance to live up to the two main roles.

At the end of the day, Lovebirds may not bring anything new or necessarily special to the table but manages to nail the realistic perspective of a relationship in the most real, funny and complicated ways. This film takes the generic story and turns it into something bigger and worth watching with its good premise and an incredible cast. The writing is great and the structure of the film is proof of that. The tone and pacing of the film are flawless and this film flies by but not in a way where you are unsatisfied. The characters are easy to root for and relate to making this a great and emotional experience. I'd definitely recommend this film to anyone ok with watching something familiar but does so so much right!