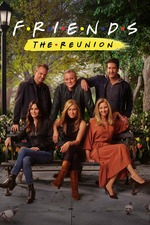 Holy shit, after watching this I am rooting for David and Jennifer more than I ever did for Ross and Rachel! And how hilarious was Lisa freaking out about the bug? And Matt seemed so genuinely into everything that was happening!

Everyone knows Monica, Rachel, Phoebe, Joey, Chandler and Ross. For many people my age and for me they feel like family. Their stories resonated with people across the globe and continue to do so. The show is so warm, sweet and relatable, featuring likable characters, situations everyone out there will find familiar and some truly fantastic acting from the entire cast. It's also one of the few shows that maintained its quality through its entire run and is incredibly rewatchable.

Nothing in pop culture came close to this series. Marvel will never reach its level because of the demand to familiarize oneself with the universe. "Lost" and "Game of Thrones" had longer episodes and they were not something light everyone would enjoy. And comedy shows these days face the obstacle of too many options for people to choose from. But back in the 90's and early 00's there was no Netflix, people didn't spend their lives looking at their phones. And this was the show that aired everywhere. Nothing will ever reach its fame or popularity, especially that it continues to find new audience with each of the countless re-runs.

I feel so bad for the teenagers these days who are trying to cancel this show for being "problematic". Because of that mentality many of them will not experience this series and fall in love with it. And I am so grateful I grew up in the 90's with no computers, no mobile phones and a TV that always had "Friends" on.

The reunion was so lovely and warm. It was not perfect - why not Conan but Corden? Why including all those people who have nothing to do with the series? Where on Earth was Paul Rudd? The only person outside of the show who fit well was Gaga. But it was wonderful to see the cast again, learn all those things and see the behind the scenes footage. I think it was the right call not to do a new episode of the series and just do this special episode that really celebrated the series and people behind it. They have given us all so much laughter, warmth and comfort. They are in our lives and in our hearts. They are our friends, forever.

Could I *be* any more grateful?