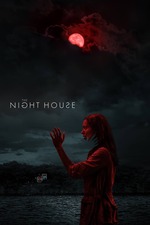 Nothing is after you.

I said it before and I will say it again: if there was any justice, Rebecca Hall's performance in Christine wouldn't just win all the possible awards, it would consistently get mentioned in all those "best performances ever" lists. She is one of our finest actors, always delivering strong work and making an impression. She has character, charisma and she radiates inner strength - the woman has such fierceness that she even managed to be memorable in Christopher Nolan's movie and we all know that dude can't write interesting female characters. I really, really wish someone would make a movie starring her, Jessica Chastain and Rebecca Ferguson because the amount of female strength (which is the REAL strength) these women project simply by existing would be awe-inspiring.

Hall's presence and performance are the best things about this movie, but even without those it's a decent horror film. The sound and production design along with cinematography are really outstanding and together make for the second finest jump scare of the year, behind the one in episode 3 of Midnight Mass when I was gazing lovingly at the hot sheriff and then the window moment happened. And I'm a big fan of horror not signaling to the audience that there's something wrong within the frame - something creepy, something odd - no zoom in, no loud music, you have to notice it yourself and when you do it's far creepier than if the director lead you to the realization with clues. There's so much of that here and I loved it. This may just be the most clever way I've ever seen a filmmaker show an entity in a horror film - built out of shadows, door frames, ripples in the water. Utterly brilliant idea.

The premise is interesting - it's similar to the basis for a well known horror film franchise but here it's approached in completely different way. So the idea, the atmosphere and the suspense are all present...but a horror film is only as strong as its third act and its thrilling reveals and here they both disappoint. The ending feels rushed and while for majority of the time the film does an admirable job of working both as the metaphor for Beth's suicidal thoughts and literal supernatural entity horror it collapses into abstract in its third act and doesn't explain the baffling actions of the protagonist's husband. Some of the film is very dumb and it really slows down when Beth is looking for answers - if her husband is at best a cheating asshole or at worst a killer. Is "local man does terrible things" supposed to be a huge reveal? Because show me a decent man and I'll show you my surprised Pikachu face.

It's really a shame because the film draws you in, the ambiguity of the line I quoted in the beginning is brilliant and Hall makes you root for her complex character. Still....it's far better than most movies released in this year and Hall is enough to make it worth seeing.

PS1: It's always nice to see Sarah Goldberg!
PS2: Ben Lovett's score is lovely, this is a year of weak movies but gorgeous scores!
PS3: It was driving me insane where do I know Evan Jonigkeit (Owen) from. Apparently he played Nick in Bone Tomahawk but seeing how that character had THE WORST DEATH IN CINEMATIC HISTORY I blocked that out and he was in Frontier but I watched that for Momoa so I literally didn't register anyone else in that show. Maybe it's the resemblance to the young Christopher Eccleston that makes him seem familiar?