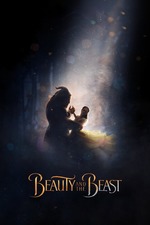 What a BORING experience. A completely insignificant, un-special shallow pool of a flick!

Who would actually prefer to watch this over the Disney classic? There already is a live action Beauty and the Beast; it came out about 70 years ago, was directed by Jean Cocteau and it was great!

Okay, I'll be honest I'm not as angry as I'm letting on to be in the top few paragraphs; mostly because this film didn't get an emotion out of me at all. I finally saw this movie, watched it with my family, and even they didn't have much to say about it afterwards. Like it was just something to kill a few hours of "quantity time". Who wants a piece of art to actually elevate your time together?

Funny enough, I struggled to really get my thoughts together on this one, mainly because the story isn't that much different from the original. So I wrestled with the idea of "Why do I love the 1991 classic, but am so unmoved by something that it's whole point is to copy said film. But the answer is quite simple: film is all about presentation. A plot is important too, but how do the other components of film reflect or interpret the story? How do they bring it to life? And let me say that with that in mind, this film is not the same, it's very different. The Acting, the directing, the music, the effects, or any connecting relationships you my find are hardly an ounce of the passion we got from the Animated classic.

Another thing I thought of is "Well, it's not exactly the same, they added a couple of things" It gives the impression that they might have tried but the additional scenes don't really add anything. There's a flashback of the Beast's childhood, there's a subplot of Belle's mother and these don't show any kind of new depth on our characters. Belle misses her mother 'whoop dee doo" Eventually her father says "Your mother loved you" and she's happy and never going to think of her again. Not sure what that has to do with her and the Beast but hey, at least it's different, right? The other big one is Belle's father being knocked out in the woods and being taken in by... the witch! the one from the beginning who put the curse on Beast and his friends. Look at that they gave her a bigger role! Isn't this so realistic! Again there are no major changes to make it it's own thing.

It just felt like nobody cared about making this. Nobody had any grand reinterpretation of the classic story, it's so plain to see that it was just a Disney cash grab. "What's that? Emma Watson is terrible? Eh, whatever, we're Disney we're going to top opening weekend whether we suck or not." and while this film didn't completely suck, it was just boring which is the worst crime a film can be. The actors, the director, it just feels like nobody was trying. I know I wasn't there on set, there could have been plenty of people who put their heart and soul into this, but as a viewer, that's nowhere prevalent and I found it hard to find anything worth of substance.

Did it occur to anyone that maybe this story was meant to be animated and not live action?

I hated the designs of the... furniture? Like, Lumiere and everybody you know who I'm talking about. Bad designs for all of them. The characters in the animated film were so much more lively, but here, most of the characters just have rigid movements and flat faces (if any faces at all) and looked like someone just put a sticker over some of the objects. Lumiere has no eyes (which the animators of old would have stressed how important eyes were to characters connectivity) Mrs. Pots had a whole rearrangement, her face is just plastered to the side of a tea pot. Sure the original may have looked weird with her long spout nose, but here's the thing... IT'S A CARTOON! It was acceptable! Hell, any kid watching that would've said:
"Yes, that is exactly how I would think a Tea kettle with a face would look like! The spout would be her nose!"
No, screw that, this is the live-action, serious, rendition! We're done with cartoons! Just put a tiny expressionless face on the side. It doesn't look awkward when she moves around right? She looks more like a haunted item from a Japansese horror story

Also is it just me or was the end fight with the villagers and the objects kind of brutal? I mean it was humorous in the animated film, but here it's either cruel or awkward on digital film.

Every scene just seems more awkward without any nuance, especially during the musical sequences. With animation, the musical numbers had so much more energy and charisma. There was always movement! Here everything just seems still and lifeless. And to be honest I really don't think the problem is adapting animation to live action, because there are plenty of live action musicals with quick cuts, and fast movements! When revisiting the animated film I noticed that during the opening scene the camera does actually move. It's either gliding, panning or zooming in on a scene. The camera moves more in the animated film, than it does in the live action, which is pretty difficult to do!

I guess there was a couple things I liked. Some of the sets and costumes were nice and it was colorful... sometimes! But nothing stood out as being anything special or gave me any reason to keep watching (even though I did) Like I said this film wasn't absolutely terrible, just bland and I didn't get angry over it right away. What does make me angry however, is just the fact that this was a 'success' and Disney is going to keep doing this trend. And by trend I mean something that is not a trend but Disney will still do because they're a billion dollar company loved by everyone on the planet, they can do whatever they want. Including remaking all their original animated classics as live-action films.

It seems like people in this decade have forgotten the true charm of animation. It seems like people just want 'realistic'. "Oh wow look at those effects! That sure feels real doesn't it? You know what I hate? Those Disney classics, there was no CG in those at all it didn't feel realistic in any way! I want live action remakes of them all, that will make me care more!" Don't get me wrong, I'm not against CG, and there's plenty of great computer animated films, but animation can go beyond realism. It's magical it can distort what we know as reality yet charm us with it's own unique world. The Disney films are so much fun and creative. This film isn't trying to show Beauty and the Beast in a new imaginative way, it's just cashing in on nostalgia. Aladdin was fun and magical, The Lion King was heart-breaking, these films are so great to me I don't want to see the format that made them acceptable in their weaknesses yet emphasized in their strengths taken away because it's more 'realistic'. If it's as stilted, awkward, and half-assed as this cash cow, then count me out! Why do I want to see realistic Pokemon? They look so wierd, how am I going to take that seriously? Come on, you saw Will Smith as the Genie, are you really going to give your money to something that came up with that, nearly 5 years after Robin Williams death? Are you going to let something that doesn't care make billions of dollars worldwide, while true artists all over struggle with original ideas of their own?

It may sound like I'm exaggerating but I have actually met people who refuse to watch cartoons because "they're for kids" but are perfectly fine with seeing nauseating live action romps that are just as out there, but harder to accept in this format. Animation is a special art form if used well. And I'm not just talking about Disney films. If you think animation is only for kids, then you need to see Fantastic Planet, Pink Floyd: The Wall, Yellow Submarine, It's Such a Beautiful Day, Akira, Princess Mononoke, The Wind Rises, Only Yesterday, Perfect Blue, Paprika, Waltz with Bashir, Fellidae, and probably countless others I can't think of right now. And if you think kid's entertainment can't be enjoyed by Adults, or you think that since it's just for kids and it shouldn't be that well made, you are in desperate need of a more open mind!

Ugh, I'm sorry. I love Disney, but right now they are so far gone, that the only way to get them back is to let them know that we are not idiots. We're not hungry dogs who will eat up whatever scraps this rich company throws at us. Animation is a great medium that maybe wasn't meant to be 'realistic' and for a damn good reason too!

Not terrible just barely passable, but we deserve so much better than just 'passable'.

Trek Through the Unknown Rankings