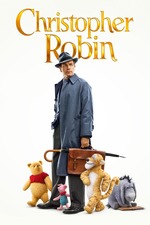 Mixed feelings on this one, but nothing to positive to say really. Pooh and his friends were all very charming and likeable. I feel like the film captured their spirit and personalities very well. The story on the other hand is just bad. It starts out cliche as hell, in a plot we've seen hundreds of times. Next it seems like some conflict comes in to play, but it's more of a bait and switch. Then in the last half hour the film acts as if there's a climax which just sort of comes abruptly.

Christopher Robin is grown up and is obsessed with work having no time for his family! Ugh, really? Why are movies still doing this? Then it seems like something is going to happen. Pooh can't find his friends so he wanders into the real world to find Christopher Robin. So is this what the film is about? Trying to find the others who have mysteriously disappeared? No, turns out they were all just hiding because they thought they heard a Heffalump. Then Pooh mysteriously disappears. So are they going to try and find him? Wrong again, he's just sitting on a log somewhere because he was sad or something. Then Christopher Robin leaves his bag behind so the others have to hurry and return it to him! I'll be honest I liked this act the best and there were some cute moments for sure. The "characters coming into the real world" trope is usually done so poorly, but luckily it doesn't rely on dumb gags like Pooh discovering snapchat or some shit like the Smurfs would do. However, it took this long for something to actually happen, and it didn't feel worth the wait.

Ewan McGregor is great as always, and I love the voice acting as well. It made me chuckle a little bit and Pooh had some great lines. There were some nice moments throughout, but sadly I just wasn't invested overall. This isn't awful, it certainly doesn't feel like a bastardization of A.A. Milne's classic work, just a bland, and generic retelling of it