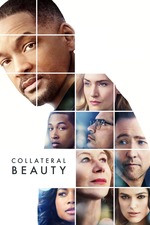 Take a drink every time someone in this movie interrupts traffic.

Collateral Beauty: what a perfect name for what this mess turned into.

For my fifth installment in my "Trek through the Unknown" series, I subjected myself to watching 2016's biggest failed Oscar bait movie "Collateral Beauty" I have to say, I'm rather disappointed. Not because I thought this would have been good, oh no, I thought this would have been hilarious! I saw the trailer, but once I heard what the actual plot was, I had to take a moment to process the sheer idiocy, and had a good laugh. If you don't know the plot, sorry, but I won't dare explain it here! Trust me I'd love to just tear the synopsis into pieces and describe everything wrong about it, but I feel like if someone were to go into this blind than this film would be a little funny seeing them surprised by this unbelievably ridiculous concept. It's not a spoiler, it's the main story, but I just feel like this would be an okay bad movie to go into blind. Other critics have described the plot so maybe it's not that big of a deal. But if you saw the trailer and think you know, you don't. The trailer is just as manipulative and deceitfully cold as this movie.

Worst aspect of this movie? The characters. Will Smith is incredibly underdeveloped and everyone else is extremely unlikeable. Now many great films have had us follow unlikeable people, but the problem is this film portrays these characters as good people; the heroes doing what's right for their friend. You are not! They are trying to get their friend fired, because he's depressed. Yeah, guys having him get fired will definitely haul him out of his hole. Thinking of these people as doing a good deed, not only makes no sense, but is just insulting. Not only insulting to mental illness, but insulting to humanity, to life! Art is supposed to be a reflection of life, and it's baffling how little this film understands about the human condition. I never thought Edward Norton would be the worst thing in a movie. Yes all the characters are jerks, but he's the worst one of all. He's a selfish, flirtatious, cheater, who feels no remorse for what he's done. Plus he's the one who first poses the sick idea they all have. Not Edward Norton himself but the character. I don't remember his name, Whit? I hate you Whit. How dare you get played by one of my favorite actors, screw you!

Our cast never receives any consequences for their actions. Not just punishment wise, but nothing ever changes for them. By the end of the film nothing felt lost, and nothing felt gained even in it's sappy miraculous ending. A story constantly has to have events changing, and challenging our characters, to make them more compelling. But nope not this story. Our characters are perfect human beings and their saving their friend, even though they are clearly not!

Then there are two twists at the end. Yes, two! Each one just contrives and tangles the film up even hairier. One of the twists is spoiler alert seriously spoiler are you ready are you ready guys oh my gosh here it comes here's the twist you ready you ready for it you ready! So Will Smith is talking with this lady he met from grief counseling and they start really connecting and then oh my gosh you ready here it comes... The lady is Will Smith's ex wife! Did that surprise you! Yeah... because it makes no Goddamn sense! They knew each other this whole time and didn't say anything about their relationship or child?! They just decided to talk like the pretended they didn't know each other, it was a game! Yeah, you know that thing divorced couples always do! (Hey, to be fair, my parents pretend not to know each other, and they're still married! *Ba Dum tish*!) Anyway this just pushes the movie deeper into this hole of misunderstanding people and how they work. This lady seems really cheery for some reason, I have no idea why she's fine, but Will Smith isn't. The film almost makes it seem like Will Smith is in the wrong for being so grief-stricken which just angers me even more.

This film features this Private Investigator who I'm having a hard deciding whether she's the greatest P.I. or the worst. Realistically if someone used these tactics to gather info about someone they would fail in a months time. But of course she's the best because every character in this film is a saint. Oh except Will Smith, he's bad because he has depression. She records Will Smith on her phone, and also the greatest editor alive as what she does with the footage. I kid you not, there's a scene where she pulls up in a rickshaw, drawn by a bike, right in front of a mailbox so she can take a picture of it. A bike rickshaw. Very inconspicuous lady, you pull up in a completely noticeable mode of transportation, interrupting traffic in the process, to take a picture of mailbox. Why do you need the rickshaw to take the picture? Who's the bicyclist? He never appears in the film again and he saw you. He looked back at you taking the pic and like "WTF are you doing, lady?" You couldn't have just stood off to the side? I understand this is very nitpicky, but at the same time it's still an issue. Subtle details in film should subconsciously tell us more about the character, whether it be the way their house looks, or how they dress or walk or talk. This scene showed me that this lady is a horrible Private Investigator and I found it hard to believe that she's one of the best.

So how come we don't like these characters? I know it seems obvious, but how come other characters who are much worse, we sometimes end up rooting for? Shouldn't every relatable character be flawed? So what makes a character sympathetic or unsympathetic? The answer may not actually be that complicated. It's not a mathematic formula of balancing all the virtues and vices in a character, making sure you give them the right amount of good traits vs. bad. In my opinion it all comes down to the presentation of the film and what does the story make of this character? Are they the hero? Are they the villain? Are they struggling to get our of a situation caused by themselves, or society? Are they sympathetic or not? Keep this in mind, not every character is meant to be sympathetic. Daniel Plainview, Jordan Belfort, Louis Bloom from Nightcrawler are not painted as good people. Sometimes these films are just meant to be character study's or are using them as interesting looks at what our society does to certain people. Many people love Anton Chigurh but I hope it's not because they sympathize with him. They're interested in this creation. This Demon man who stalks people across the country and who is so deep in his twisted, sadistic philosophy, that it's nonetheless intriguing. So what about the characters that are supposed to be sympathetic? Yes, you give a character flaws, but you also make them semi-aware of their flaws. The mistake this movie makes, is it portrays all it's characters as good people. On top of the film itself trying to be smarter and more profound than it's audience just made me feel like I was being talked down to. The best films don't raise the characters on some pedestal, they bring them down to our level to make them relatable. I've noticed that the worst kind of films are the ones that try to show their characters as being perfect which separates us from them and also makes us hate them even more if they're incredibly flawed. It's what this, Atlas Shrugged or even the video game Life is Strange. Yes, I know a lot of people like that, but I have zero sympathy for Chloe who just might be a good example. She's not a rich person in a suit, but she's a rude, lazy, back-talking, whiner, and the game wants us to think everyone else is the bad guy and she gets no repercussions for her actions. If you want us to feel sympathy toward a unlikable person, take a look at Bojack Horseman, or Jack Nicolson in "As Good as it Gets" these characters are partly aware of their terrible personalities and want to make up for it. "As Good as it Gets" is a little more light in tone, but I think is still effective. We eventually watch him feel guilt, and try to connect with the people around him. "You make me want to be a better man" Edward Norton never said that to his daughter in this movie. Plus those are comedies so we can also laugh when Nicolson drops a dog down a mail chute.

Character development has way more for you to learn about, and I already went on an excessively long rant. Anyway this movie is a piece of crap. One thing I will give it, is that they actually set up all those dominoes, even having a 15 year old expert come in to help. I felt like the actors tried their best and even the director too, but with a script, this offensive to art and human intelligence. I thought this would be funny but it just wasted my time.