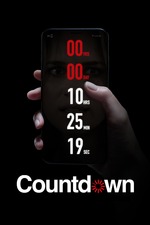 Countdown is an interesting movie and makes a bold move. Rather than being original or scary, it's a run of the mill blumhouse horror movie that's bland even to their standards. Oh wait, this isn't blumhouse? Could have fooled me. That's even worse considering how this film steals so many tropes and trends just to get more people to see the movie. Let's review the checklist:

Lazy and predictable jump scares you can see coming from a mile away: Check!

Geeky asshole trying to be the comic relief but just being annoying: Check!

PG-13 Rating as to get more suckers to see this pile of shit: Check!

And keep in mind I haven't seen a lot of lame Blumhouse-esque horror movies, as I try to avoid them, but this film still came off as being one of the most uninspired films I've seen of the year.

I'm trying to remember what even happened in this movie it's all just so forgettable. The concept doesn't even follow a clear set of rules and the monster was lame anyway. For instance this girl is told she's going to die soon, and she refuses to get in a car with her drunk boyfriend. The app then tells her that she broke the rules so he's coming to kill her now. Really? Why would she get in the car with a drunk driver? That's a rational decision anyone would make whether they knew they were going to die or not. So if you "break the rules" or whatever this boring designed shadowy monster comes to get you. I was reminded of the Final Destination. These aren't perfect movies, but the villain is death itself. It's all just freak accidents caused by some kind of unknowing force, but nothing too out of the ordinary. This movie could have at least had some neat kills in that sense, but instead just a big scary monster gets you.

And the damn jump scares, why does Hollywood keep doing them! There's about 20 jump scares throughout and I don't think one of them is anything but a fake out. I can tell when a jump scare is coming and then "Oh geez! It's just me! sorry, what's wrong with you!" If you're going to do a cheap jump scare, at least be something intentionally scary!

The ending just gets more ridiculous and I didn't think it was possible, but it makes you hate our protagonists even more. So first they decide to stay in some circle or whatever to protect themselves from death. Then for some reason they abandon that and have a new plan. Kill someone before their time! Sure the guy they want to kill is a sexual predator, but I don't think that justifies our protagonists chasing him throughout a hospital trying to kill him. The films tone makes it as if we're supposed to side with these girls as they try to commit murder only for the sake of saving themselves!

A completely uninspired film in every way. Never scared, never cared, never thrilled, never laughed,(actually that's not entirely true) So easily forgettable. Just don't even waste your time. It's not worth the watch count.