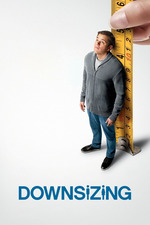 What the hell are Christoph Waltz and Udo Kier doing in this movie?

When it comes to Hollywood directors, Alexander Payne is one of the few I follow or care about. I love the essence of his comedy dramas which just seem to speak to me. His films always feel like they have a purpose of relating to people in some way through the use of humor yet respectable representation as well. So naturally I wanted to see "Downsizing" which to say the least was dissappointing. I had already heard the reviews however, most of them saying it was boring. Because it is. Boring and completely unfocused are the two main problems I would accuse this film of having.

The premise certainly sounded interesting, and in the first 30 minutes (this film takes way too long to set things up) I was willing to give it a chance and see where it was going to take me. Unfortunately this movie just teases many ideas. I then realized by the end that the whole film felt like a set-up, solely because the plot will introduce devices here and there, and then get totally sidetracked just ten minutes later. Like I said, the whole shrinking idea was enticing, and I do found scenarios like that interesting. There's so much room for creativity when their whole world is changed. However, I soon realized that this plot that happened had really nothing to do with that. Hear me out: So a man divorces his wife. Then he tries dating, but it doesn't work out. He goes to a party and gets drugged. He meets one of the cleaning ladies and strikes up a relationship. She takes him back to her nieghborhood and he helps her out. Notice how I didn't mention that the characters were downsized? That's because it has nothing to do with the plot. In fact, once they're shrunk, everything looks exactly like it did when they were big but smaller. Where's some innovation? Where's some creativity? Any kind of imaginatin or humor about downsizing is completely non existant.

If you don't mind I'd like to go more into detail about the plot, I'll try not to spoil anything. (Although this movie is just one long set up for nothing so there isn't really anything to spoil) The film had potential, but I think it had too much potential. The Movie had no idea what it wanted to be. Instead it presents an idea and then abandons it to tease something else. In the beginning, Matt Damon and his wife are confronted by a contentious man who thinks that small people shouldn't be allowed to vote. Okay, that's something, is that going to play in later? Nope. Literally never mentioned again. Another interesting chance they had at some commentary, was the ghetto of the small world. The whole first act the film builds up just how wonderful it is to be small, but no one ever mentions that there are still poor people in this world. Does the film touch on that? I think we know the answer. No creativity, no expansion or fleshing out of the society, it makes for some of the laziest world-building I've ever seen.

The film could have at least been funny, but it felt like it didn't even try. In the waiting room where Matt Damon and his wife are waiting to be downsized, there's a Jewish Rabbi and a boy wearing a yammaca in the room. But they're in the background and nothing is ever done with them. Was this a throw away joke? I don't get it. Neil Patrick Harris and Laura Dern have cameos in the movie as they show off how great it is to be downsized; however they play fictional characters, not themselves. Maybe this is just a personal preference, but wouldn't you have loved to see them as the celebrities they are endorsing downsizing? To see just how this new phenomenon has effected everyone in the world?

I'm honestly convinced this movie didn't know what it's goal was. I almost wanted it to go straight up "Fantastic Planet" and have the big people try and wipe out the little people. This plot has ADHD, it's not interesting, creative, or even funny, which Payne usually delivers on. Meanwhile I'm playing a game of "Guess what this person with an accent said" (seriously the majority of the cast all had distinct accents from various different places) I will say this for Payne, that for working for almost two decades now and this to be his first real flop, isn't bad. I'd say it's a decent track record so far. I also feel like he strayed for his path a little bit too. I could see someone like Charlie Kauffman making a film with this premise, and it probably would have turned out better. The more I thought about it, the more I realized there's about nothing I like in this film. The performances are fine, not bad, but nothing exceptional. I was going to give this a 4 and the only reason I won't give it a 2 is because it's not excrutiating or offensive. Just very boring. Don't recommend it, not even funny intentionally or in a pathetic entertainin way. Check out Alexander Payne's other films instead.