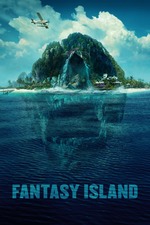 There's a lot to digest here folks. Like an all you can eat night at Taco Bell. And this movie is the result.

What did I do during quarantine? Well I was taking some summer classes which is why I haven't posted anything in a while, but I also spent some quality family time watching tons of shit movies. Some Blumhouse, some knock off Blumhouse, (how flattering) It was hard to tell due to their lack of originality, but I was waiting for the one! The masterpiece, the stinker, I want to see the trashterpiece! Then we stumbled upon it. We had found it! The big Blum! The crown of crap Blumhouse movie! And after seeing the company's dark take on a classic TV series, I knew that I had to review the latest Blumhouse classic after witnessing this atrocity. I genuinely believe that nothing about this movie was done well. In fact, just about every aspect is ridiculously bad. As I watched this movie, I could hear the likes of YMS tearing it to shreds mostly because I was doing it and I normally don't nitpick like that. But "Fantasy Island" is so bad that the sludge just drips into ever nook and cranny. You can't escape it. That's the real horror.

I can't even call this a horror movie, it feels more like a... dumb adventure thriller thing. The best words to describe this movie are 'stupid' and 'obnoxious' in just about every way you could think of. The way it's made, the story, the fantasies, the character's, their exploits, their decisions and the nonsensical twist which I will gladly rip a new one soon. It feels like a movie made for teenagers. Stupid teenagers, so they can gawk at the paradise stuff or whatever, but even then, there's not much for them on a purely juvenile level.

Speaking of characters they all suck. But none so much as the two brother characters. At the start of the movie, they step out of the plane and, this is actually impressive, I have never hated two characters so quickly and profusely as I did these two dunderheads. I think these guys are supposed to serve as our comic reliefs, but they're these hyperactive frat boys what "want it all!" They drink and high five and shout trendy catchphrases at just about everything!

As for the rest of our diversely white cast, they're all terrible actors too. We got a girl who I think was on Pretty Little Liars, that Asian comedian, Angela from Mr. Robot, and some lady who I'll admit was the only one who felt like she was trying. Oh and Michael Pena. Dammit, you know, maybe it's just me, but I look at Michael Pena and I believe there's a good performance in him somewhere, he just needs the right role and to stop being in piece of shit movies like Chips, or Jexi. But he is so miscast in this role and is neither endearing, nor intimidating.

Now I have a great admiration, and respect for classic stories, and one that's been embedded in many different cultures and folktales is the "Be careful what you wish for" tale. Now I can understand if some might be turned off by this, as a "Monkey's Paw" story is old and slightly cliche. However if presented well I would enjoy it, and I really tried giving the movie a chance. I thought "Well let's see what Blummy is able to do with this concept." But surprised as you shouldn't be, the fantasies go nowhere. The pretty little liar wants to torture an old bully, but then realizing it's real, tries to escape with her. One wants to be in the army, but the resolution to that is weaved into another fantasy and is just kind of forgotten about. And the other lady does get what she wants and it actually all seems to work out, but then she decides she doesn't want that for plot convenience. The only characters who actually got their wish twisted up, were the two frat boys (who shared the same fantasy so I'm counting it as one) and like I've already established I hate them and do not want to watch them at all. I am neither invested or entertained in these idiots subplot. So even if these dreams actually did play out in a traditional way, I was not entertained in the slightest anyway, so it probably wouldn't have made a difference.

I guess my biggest issue that comes to mind (and look how far along we are) is the dialogue. Every line of dialogue and I mean every word has one purpose and that is explaining. I swear, I can't think of one line that wasn't about exposition. "You know my fantasy is As a kid I was bullied and... ... I want to get revenge on her!" "Tell your goons to let go! No they work for the island and it keeps their fantasy alive..." Why do I need a backstory on your henchmen? I don't even give a shit about our main cast what makes you think I want to hear these creeps life story?

My least favorite scene in the whole film has to be the bully torture scene. The pretty little liar goes down to a basement to see Angela from Mr. Robot strapped to a chair. She narrates and thinks out loud. Every. Single. Thing. that. she. thinks. of. or. happens. It's a perfect example of how this movie is annoying and talks down to us as if it thinks we won't understand. Then again anyone this movie is made for would probably get lost singing the ABC's. And after she frees the bully, she for some reason didn't know it was her. Then she asks 'who do you think could have done this? Hey, maybe it was psycho-stalker girl!' Psycho-stalker girl? Is that really the best name you could come up with? Was this movie written by teenagers? But as irritating as this scene is, it's not quite stupid enough yet. It gets worse:

Well now I'm going to talk about spoilers, I don't know if people typically do this on Letterboxd, they usually just warn the whole review will be having spoilers, I don't care. this movie sucks. Skip this if you want here's your warning:

So the big twist of the movie is it's revealed the Pretty Little Psycho Stalker whatever girl was behind it all along. All these people had something to do with letting her boyfriend die, even though they didn't, so she makes a deal with Michael Pena and her fantasy was to exact revenge on them. This is one of the stupidest, idiotic, poorly thought out, appearing out of the blue, plot twists I've ever seen on screen! One of the worst ones most definitely. Plot twists aren't just supposed to be unpredictable. If that were the case then they could come up with any crazy scenario. They could say that this whole movie was a dream inside Pena's head warning him of 9/11. But there's more to a good twist than that. The film in hindsight should make more sense, not less. In the case of "Fantasy Island" this raises far more question that it does answer, the biggest one for me is going back to that memorable torture scene. If this was all your plan then why did you look shocked and free her?! Why did you only have her locked up and let the others fiddlefart on their own fantasies? Why did she not try to kill anybody up until the end? This all seems incredibly complicated. If this was your doing then why didn't you just secure the fantasies and make them kill everybody quicker. Why did you have one fantasy intermingle with another? By showing that it was all her doing it just makes her plan insanely more complicated and not even possible. This is a gigantic plot hole! The Earth could rotate itself through this whole it's so big! If this script was swiss cheese, there would be no cheese, just a crumb and even that's generous! But the writer's didn't care. They're a bunch of teen brained idiots who were probably making this up as they went along! And then, the girl stabbed the guy and then the girl was the one the whole time! Oh yeah no one will see this coming! This twist is gonna knock em dead! We have been blummed.

Also there's this lady who's Michael Pena's wife, and at the end their all like "What? that's his wife!" And I thought "Oh were we not supposed to know that?" I felt it was pretty evident. I also just remembered their's a scene at the beginning in which a girl is on the island and she's running away from something, and then finds out Michael Pena and his island are evil. I wasn't sure if this was Portia Doubleday's character, but I thought Michael Pena was only being evil because pretty little stalker girl asked him to. So why is he being all terrifying here! This movie is so poorly thought out!

"Fantasy Island" is one of the most inconsistent movies I've ever seen! The filmmakers had no idea what they were even trying to do. The only emotion it gets from me is irritation and frustration. I was surprised and insulted at how dumb this film thought I was.

And it's not funny! God I'm sorry the more I think about this movie the more it hurts! The jokes are so bad I wanted to stand up and punch myself in the stomach to make me feel better. It's not even enjoyable in an ironic way.

It's not a horror movie, it's just a bland mishmash of tonally deaf genres. It doesn't even fulfill it's moral goal of being careful what you wish for. One of the stupidest movies in just it's humor, it's content, it audience, and especially it's script. This is one of the worst films of the year. "Blumhouse's Fantasy Island" (a title I'm sure he's proud of) can finally lay to rest and be forgotten about just like all uninspired lazy film should. Goodnight, Blumhouse. I can rest easy tonight.