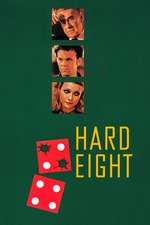 PT Anderson's debut is often considered his weakest film, but don't let discourage you because this is still a great movie!

Like other PTA films, Hard Eight almost feels like the grandson of a classic Hollywood film. It's a movie of scenes with the suspense relying on the characters, acting and dialogue to hold the audience.

Philip Baker Hall gives a strong performance, and the best one of the film. Samuel L Jackson and John C Reilly are great as always. Gwyneth Paltrow is Gwyneth Paltrow, take that for what you will, but seriously PBH is incredibly good in this!

I loved the film's random bursts of humor mostly coming from John C Reilly's dimwitted character. Unexpected, by always made me laugh. There's also some great editing and tracking shots, from PTA's regular Robert Elswit, utilized in the film which also makes it stand out.

I think what turns people off from loving this as much as PTA's other work might be the mystery that's presented in the beginning, but then the film seems to trail off in other directions. Why does Sydney want to help John? After 20-30 minutes in it seems like the film isn't going to answer that, but I still held on. I tried to remember that this was Anderson's first film, so people weren't familiar at all with him yet. Me however, I trusted in PTA. The film diverges even more with a lengthy scene in a motel room, and I can honestly see where some may lose interest here. It's a well executed scene,but many were probably discouraged at the lack of focus the film seemed to have. This honestly didn't bother me too much, but perhaps this is why it's regarded as PTA's weakest. However, if you stay for the third act... well, let me just say, stick around and trust in PTA.

I still might rank this toward the bottom of Anderson's filmography, but that's only because he's gotten so much better over time. I may actually like this more than Phantom Thread. Any PTA fan needs to see this. Hard Eight may not be his best but I still greatly enjoyed it!