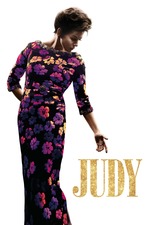 Judy was decent. It hits a lot of the old familiar beats we're used to with these biopics, and although it didn't completely shy away from Garland's mistreatment from MGM, I wish it would have went all the way through.

Renee' ZellWegger's performance is great, although she doesn't look that much like Judy Garland, she really embodied her mannerisms and dialect pretty well. There is some great moments of cinematography too, particularly the opening scene and the music segments are very well done. Some songs didn't sound like it was Zellwegger singing, but I'm not entirely sure what was her and what wasn't.

The only performance I didn't care for was the actor playing Mickey Dean. He just felt so disingenuine to me for some odd reason.

The tale of Judy Garland is a tragic one. It's my love for her talent which makes me sympathize with her. A quick run down for those who may not know, Judy began performing at a young age, and once she got into pictures, the studio heads constantly told her she was unattractive and even tried to alter her appearance. She was put on drugs prescribed by MGM I might add and given weird diets even though she was healthy and fit. This may sound like an obvious no-no, (and okay it still should have been back then) but this was the early 30's. Judy was perhaps one of the first, if not the first star to be robbed of her childhood and have her life fabrically ruined, by harsh scheduling and pills to keep her awake, asleep, and not hungry. Garland was practically an addict her whole life. The end of "Judy" states that she died at the age of 47 but fails to state why and how. She overdosed on Barbiturates. It's still to this day not sure whether it was suicide considering that Garland made two previous attempts at taking her own life before.

Sadly the ending of this film doesn't portray the tragic downfall and mental deterioration that Garland went through. I feel like the director wanted to and tried to, but of course they had to pull some punches to make it enjoyable for audiences to endure. The ending is just a sappy scene in which Garland cries while singing "Over the Rainbow". Then the crowd stands up and finishes the song for her; yes the film goes there, and it's a happy ending for everybody. But Garland never got a happy end. I don't criticize this aspect of the film because I'm cynical and think every movie should be a downer; it's because I want this film to portray Garland as she truly was, and her's is a dark, unsettling one. Similar to the heat "Bohemina Rhapsody" got, which by the way I think "Judy" is much better. But if you love Freddie Mercury or Judy Garland, why not tell their stories? Why make up a fake biography for Freddie Mercury? If you love him why don't you tell HIS story?

Perhaps I'm going a little overbored, because the film doesn't make any dramatic changes to Garland's life and stays pretty much faithful. Like I said there are some jabs at Louis B Mayer and references to how Judy was treated at a young age, but I just felt like it didn't go all the way. Maybe if the ending was slightly different I would like this more. Instead we just get 'the crazy, quirky celebrity who's hard to deal with, but then everybody loves her at the end!' yada yada, we've seen that so much times. I was really holding out on this film, because I thought a Judy Garland biopic would be interesting, but after watching the trailer I was worried. I left fairly satisfied, and while Zellwegger brought her best to her portrayal, I felt like the film could have taken it up a notch. I feel like Garland's story is one that should be known in all it's unadulterated grittiness.

Despite this issue, I really do think this movie is fine and good. It certainly tries but is bogged down by being oscar-baity at times. Check it out if you want.