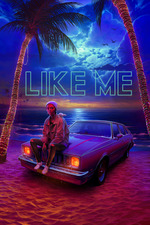 I know this detracted some people, but I kind of liked it. It's incredibly flawed but I found quite a few creative elements throughout as well. Sometimes I have a soft spot for these neon lit indie films. Part of me wants to support an artist with an original idea despite how amateurish it can be.

The visuals are very pleasing albeit a little overdone at times, and I can't say I've seen a story take this angle on the digital age quite like this film. Perhaps it's more of a guilty pleasure, but I found the insanity, the visuals and the atmosphere enough to keep me interested.

My biggest issue with the film is it takes itself a little too seriously sometimes. I understand it's trying to be more of a thriller, but when it's trying to satirize subject matter like the internet and social media, it comes off as a little pretentious. The back of the DVD even describes the film as containing "thought-provoking" material. Really? One of the characters is an internet troll he appears more as an ominous, doomer, type of person. Yeah, that's what internet trolls are like. Rather than just giving us a crazy, thriller about a couple of jacked up people, the film has this idea about it as if it's making some grand statement about the digital age... but it's not.

On the surface I found our lead character interesting. More than just a loner, she's a straight up psychopath who just happens to be caught in the digital age, and uses that as her instrument of torture. She wants to make a connection with people, but the only way she knows how is to torture them. On the other hand we don't get a lot of insight into why she is the way she is. Perhaps if the film was taken from the point of view of the man she kidnapped, it would've worked better as the film could've been a character study through the eyes of a... slightly more sane person. Speaking of which let's get to this character.

I think the film should've had some better world building. Their portrayal of the internet is ridiculously exaggerated! Ignoring the hamfisted message the film is so set upon, perhaps this could have worked if the rest of the setting had become this sort of warped alternate universe where viral videos had taken a dark turn. Our protagonist isn't exactly an outsider, many of the people she encounters are just as crazy as her, so the mood and world gets a little muddled in this. Is it a psychological breakdown of someone, or a critique on a dark world. Marshall is just as messed up as Kiya is, yet their relationship isn't clear. When he leaves Kiya I think their should have been more of a connection there to make his departure seem more heartbreaking to her.

I later compared this to a Yorgos Lanthimos film. His films are disturbing, and cover some deep themes, but their comedies as well. Perhaps if "Like Me" had a sense of humor it would've been more enjoyable to watch.

Other minor nitpicks include the fake blood, and how her reflection in the mirror didn't match up with her movements, but that's about it.

It's a pretty disturbing film, one scene actually made me queasy, and those sensitive to vomiting, be warned! The sheer craziness can still be engaging. There is certainly substance here within the character, visuals and even it's unique take on social media and crime, even if the film doesn't fall all the way through.

If you have a weak spot for films like these than check it out, otherwise there's no telling what you might think.