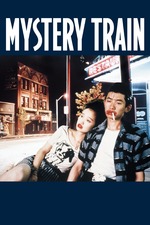 Jim Jarmusch is like Wes Anderson to me, in that it may take me awhile to get used to his style of cinema. Jarmusch, like Anderson, makes very idiosyncratic, independent, films that are well written and directed, but are also filled with quirky, deadpan humor, and scenes that seem to be pointless, which not all find appealing. But regardless of that I liked "Mystery Train" in all of it's strangeness!

This is my third entry in my Jim Jarmusch Journey, and seems to be in between what I thought of his previous two films. I seem to be the only person in the world who doesn't like "Stranger Than Paradise". Yes, I know it's supposed to look low-budget and cheap, but I still didn't find the main contents interesting. "Down by Law" however, was much better in my opinion and I love that film! And now I get to "Mystery Train" which was certainly enjoyable.

I love anthology films, or movies that have separate stories going on, but this movie has them semi-related with little links in different segments. Some things are random like the Elvis references, while other like the hotel, the gunshot, and small glimpses of characters yet to appear. Not to mention other traits, in Jarmusch's cinema like foreigner's, or poor areas of town. The first two stories were very cute, and a lot of the humor and subject matter is relatively harmless, but soft and welcoming. The last story however escalates things more to a story about being on the lamb. Although slightly different in tone, this strangely doesn't hurt the film and fits in well enough. I still like the characters, and was caught up with their race, and humor that was being played out.

When it comes down to my only problem with the film, it was once it ended, I asked myself, "What was that all about?" It was well written, funny, suspenseful, cute, gritty, and very entertaining, but I couldn't help feel like it was all just kind of pointless. I don't mean this film had to have some revolutionary message, that's not what I mean by a "point" I just felt like with some much attention to detail, and quirky little subplots, that this film should've added up to something. It was just 'here are three stories, they have this in common, and that's it.' I enjoyed my experience and seeing these three stories and how they happened parallel to each other, but I couldn't help feeling empty at the end.

But besides that I thoroughly enjoyed "Mystery Train" it's a good example of a quirky, deadpan, independent comedy, a decade before someone like Wes Anderson even existed. It's funny, engaging, cute, a little shocking, but otherwise harmless film, that may fall down as far as what the overall product was supposed to be, but mainly it's just a fun, well-made film.