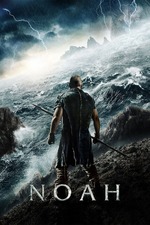 It's okay...But it's not as good as Evan Almighty

It's hard to say what doesn't work about this movie. In all honesty it's a decent film, there's just something special lacking from it. Maybe it's the whole look and production of the thing. "Noah" turns out more like a high-budgeted, green screen fantasy adventure film, rather than a biblical epic. And that's what was on my mind constantly while watching this. I couldn't help but wonder what Noah's Ark would've looked like if it was made during the classic Hollywood era. Imagine how much different this might look if someone like Cecil B DeMille or William Wyler had directed this. Gorgeous sets, and full of wide shots. Instead the cinematography is very cramped, dark, and full of close-ups. Now I love Darren Aronofsky, I think he's a fantastic director, but I'm not sure what he was going for here. It doesn't matter to me that it's different from the original tale (Very Different) but whatever. "The Last Temptation of Christ" isn't accurate to popular belief, but it had something to say, it was retelling the themes that Christ represented in it's own way. With "Noah" I think the message is about faith, but that's handled kind of loosely. Noah is told by God... or should I say 'the creator'. Quick stop; let me bring that up. I don't know why they don't just call him God. Who is this movie for? Non-religious people that really want to see a movie about Noah's Ark? You're even too afraid to take the risk of making this film too religious, when it's a story from a religion!... to build an ark so he does and not much happens in the first half of the film. They build the ark. And that's it. We see a conflict rise when a nearby town becomes aware of what's happening, but nothing else. I wasn't sure what else to expect or why I should really be invested.

I'm not even sure what problem the Army has. In the biblical tale nobody believed Noah. Here they seem concerned before Noah evn tells them. By the way bad move "This here is an Ark! Me and my family are going to float to safety while the rest of you drown and die! Er, I mean uh, no, no, this is just a hobby thing. I don't even know what I'm building. These aren't rock monsters. They're lawn ornaments, for the yard!

So once it starts raining the army attacks, but don't worry, Noah has some rock monster angels to help fight them off. Stay with me. So after the 500 year old Noah helps fight off some sinners the ark is cast away into the flood and everyone on earth dies. Meanwhile, the leader of the evil army carves a hole in this incredibly thick, boat and eats one of the animals. (guess that species didn't repopulate) And I couldn't tell what animal it was, because it was too dark! Now there are some nice shots in this film, but most of them are all at the beginning. For Instance, Noah's dream, or when the forest grows around them, but after that we're stuck in this damp boat. Every shot is a close-up, which really takes away from the epic feel to me. I get that maybe that's what it feels like to be on the Ark, but on the other hand, it's a massive boat! I would've loved to see as much as the inside of it as I could.

The characters themselves aren't that bad, they have a little development. Noah becomes conflicted when he has to make a choice (which doesn't arise until much later in the movie.) He's at first committed to doing so, that is until he must finally act. He wanders off in isolation feeling as if he had failed. Noah is then reassured that 'no you didn't do the wrong thing Go... I mean "The Creator" chose you because of who you were, so you were supposed to not do that' 'You're right! I'm great and I learned nothing!" - The End.

Okay I'm saying that much more like a jackass, and the film wasn't so amoral or atypical, it's just that nothing felt gained from any sort of experience. I felt like the film at first had a purpose, but then that got lost and muddled, perhaps in the studios trying to make the film more marketable, I'm not sure. The characters are fine, the cinematography is restrained minus a couple moments. I will give credit to a terrifying scene during the flood in which people's screams can be heard from inside the Ark. We then see a stockpile of people clamoring on to each other trying to stay just a peak above the water. A truly haunting moment I'll completely admit. All in all the film is okay with some enjoyable moments, but it's bogged down by some ridiculous and clumsy material as well. It's my least favorite Aronofsky without a doubt, having really no unique viewpoint or interpretation on the tale, but maybe someone out there will like it anyway. It starts to really lose way during the middle, but I can say I was at least willing to see where it was going to go in the first act.

I sort of recommend it, yet I sort of don't. Sorry for this review being all over the map, I just wanted to jot down some thoughts on this piece. See ya guys!