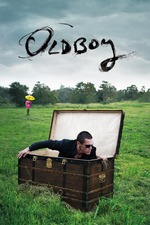 If it's one film I really didn't want to see, it was the American mutilation of one of my favorite films of all time "Oldboy". I avoided it, but I finally forced myself believing it could at least make for some good material and maybe make me appreciate Park Chan-Wook's masterpiece a little more. I'll even give it a chance and see if it does anything better. And is there any merit worth mentioning that this film accomplishes? Nope.

The original "Oldboy" was never 'realistic', but it wasn't trying to be. It had this tongue-in-cheek tone to it, that made you not take it so seriously. Being invested in the characters, and their conflicts, but accepting the absurdity of the whole plot a little more, knowing that it's not the true focus. With Spike Lee's remake however, all the creative writing, the potent humor and weirdness and everything that gave "Oldboy" it's unique identity, are completely removed and is reduced to a bland, average, American action movie. There's some gruesome violence, and ridiculously weird moments, but why it doesn't work, is the tone of this film is much more serious and gritty, which contradictory, actually makes the violence and disturbing moments even less effective, than the film with an actual sick sense of humor. It's trying to be much more darker and realistic, yet all the bizarre plot points of the story are still here, and the world is so much more intangible because of that. And in a realistic setting, moments like these come off as ludicrous and even comical (not in a good way). In one scene, Joe walks in to a restaurant and looks at a tank with a squid in it, stares at it for a while, and then walks on. What is that? Who is this scene for? It's as if the film just came out and said "Hey, remember that funny scene in the real version where Oh Dae-Su eats a live squid? Well we're not going to do that."

The action scenes are ridiculous in this. At least the original kept the fight scenes realistic (or it's one fight scene which I'll get to) here, whenever somebody gets it, they do a back flip and land on their head, or something stupid like that. So let's get to the hallway scene, the one scene I was truly dreading. Besides the putty henchmen flying around weightlessly, from fight moves that don't exist, it misses the whole power and beauty of what made that scene so iconic. Granted it's hard to replicate such a perfect scene like that, and avoiding it altogether would just be even more insulting, but this film didn't understand what made that scene so effective. The hallway scene is much more dramatic than other action scenes. The music swells, we see Dae-Su struggle against this mob that seems like it's about to overtake him at times. With "Oldboy" 2013 however, it's just a bad ass fight scene. We never see Joe struggle, he just takes them out easily one by one. In the remake, they make it out to be exciting, but the original was desperate, showing Oh Dae-Su in his most tense moment, and we're trapped with him in this true test of his will. The hallway scene was dramatic, not exciting.

The character of Joe (as Dae-Su is called in this film) is unbelievably boring and flat. In the original Dae-Su is insane. He's unpredictable, stubborn, even reckless at times. He smiles like the omniba symbolizing, that he's becoming a demon. Here, our protagonist is an asshole. That's it, he's a drop dead Dad, divorced, workaholic, drunk and hits on his clients wife. He wants to 'be a better person' so he goes off killing and torturing to find out what happened to him. Also drunk Josh Brolin sounds like Norm MacDonald. The film tries giving our character unnecessary motives. For instance our leading lady 'wants to help people' because she had a horrible life and that's why she wants to help her new friend. Perhaps this is a nitpick, but I think they tried a little too hard in this department. Is it supposed to make us over sympathize with them? What's wrong with just 'insane man becomes even more insane' or maybe the girl just wants to help him because she's curious, and interested in his story. Or the hypnotist, what happened to her? Were you afraid that the audience would question the motives too much?

The biggest insult of them all is the ending. The ending is terrible, yes, a huge detour from the original and just a slap in the face to any viewers. I try to avoid spoilers, even for awful films like this, so I won't say what, but it was the final number of this disastrous orchestra to make sure I left this film angry.

On the other hand I don't get the impression that this was just a hack film, and believe Spike Lee did actually try. In fact his version was apparently 140 minutes, almost 40 minutes longer than the theatrical cut; studios of course cut this down. Lee's directing did shine through at times, but it of course has nothing on Park's impeccable framing. There were some liberties taken in the room scenes that I liked. Cinque Lee plays an ethereal bellhop, albeit a small role, but an effective one that did kind of represent the deteriorating sanity fairly well. After that the film just bored me and didn't make my heart race the way the original did.

There were plenty of changes made, but I can't say any of them added something meaningful to the story, or did it better than Park's. Most of them were actually kind of pointless. I know I keep comparing it to the original film, and a movie should truly be able to stand on it's own, but it's even more lost when viewing it like that. In that sense, "Oldboy" was just a painfully average, sometimes ridiculous, dad-action movie. It doesn't touch on revenge, human emotions, or revitalizes Greek tragedies with modern cinema.

Why watch this when you could watch a perfectly better version that could give you a real experience like no other. And a bigger appreciation, for the original might be the best thing about this.

Trek Through the Unknown Rankings