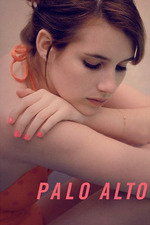 Saw a couple of my new friends share about how they love this movie, which only reminded me of how much I hate it.

Right off the bat I'll just that I hate teen films (or at least the majority of them) So many of the comedies just tread the same tropes of parties, sex, drugs (American Pie, Porky's,) and the dramas take themselves WAY too seriously (One Tree Hill, LIfe is Strange, any ABC show, or the abysmal 13 Reasons Why) Are there good coming-of-age films that I like? Absolutely! Don't believe me, I just did a long analysis of "Y Tu Mama Tambien" on here a couple weeks back. A teen film with characters just as immature as the ones in "Palo Alto" however, it examines these young boys and comments on youth, maturity, sex and life itself. It doesn't force you to feel sorry for them, because the film knows you're not going to instinctively like these irresponsible douche bags. Instead we watch their journey to manhood and fall in love with them at our own time along the way.

Which brings me to the worst thing about "Palo Alto" and that is the characters. Not only are they underdeveloped, irritating, typical douche bag kids who yell and punch everything because "Le teen angst"; but throughout the duration of the movie, we're practically being forced to sympathize with these characters and we have no reason to. They're all just a bunch of assholes, but instead of examining that, making it interesting or even funny, we're just supposed to feel sorry for them. What's worse is they're not even given any sympathetic moments. All "Palo Alto" is, is just watching a bunch of delinquent teens being obnoxious and rude, while the film beats us over the head yelling "Feel sorry for him! Feel sorry for her!"

This is not a coming-of-age film! None of the characters learn a thing by the end; instead they go off unchanged trying to make us sympathize with their shitty personalities and it's just so obnoxious!

Every intimate moment is just implied. There's a scene at the beginning where the three protagonists walk around the neighborhood and talk and goof around, or I don't know what the hell they were doing. But then at the end Emma Roberts goes up to that kid in Death Note (a fan favorite I see) and says "Hey, do you remember that night, where we walked around the neighborhood, and goofed around and did whatever the fuck we were doing?" As if it was some sort of magical "American Graffiti-esque kind of night for them" Oh that scene? Um, sure yeah.

Also James Franco stars as a Soccer Coach for a girls soccer team at the school. He has sex with a couple of the girls... and it's meant to be beautiful! We're supposed to be caught up in the intimacy of how lovely it is that this pedophile is going after his students!

As far as on a technical level goes the film is at least competently shot, directed and the music is fine too. As some of you may know this is from Gia Coppola, the granddaughter of the great Francis Ford Coppola, and the niece of Sofia Coppola, who I love a lot! That's really the biggest reason I saw this, as I wanted to see if Gia could hold the same talent as her family, and to be honest I think she has a talent inside her. I'd be interested in seeing what other projects she might make, but not wasting it on something like this.

I wouldn't say this is the perfect example of why I hate teen films, but this film doesn't get anything perfect! Just completely obnoxious, poorly defined characters, and a weak story and perspective. Who wrote this film anyway? "Based on 'Palo Alto stories' by James Franco"... James Franco... who played the creepy soccer coach... Hm, maybe we should keep an eye of James Franco for a little while okay?